Pope Francis explains "...God's grace always opens to hope, hope of fraternity and of peace..." to Custodians of the Holy Land 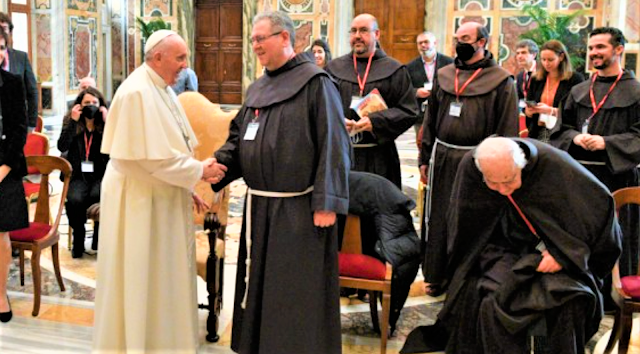 I welcome you on the occasion of the 100th anniversary of the magazine “La Terra Santa”. I thank the Custos of the Holy Land, Father Francesco Patton, OFM, for his introductory words. And I greet with gratitude all of you who work in the editing of the magazine in the various language editions and for the Holy Land Editions; as well as those responsible for websites and social media and all employees of the Christian Media Center. The service you carry out today is in line with the communicative intuition that guided the Custos Ferdinando Diotallevi a hundred years ago, and consists - as he wrote in the first issue of the magazine - in «making the Holy Land, the Land of God, the cradle of Christianity, the venerable sanctuaries where the Redemption of the human race was effected ».

Making the Holy Land known means transmitting the "Fifth Gospel", that is, the historical and geographical environment in which the Word of God was revealed and then made flesh in Jesus of Nazareth, for us and for our salvation. It also means making known the people who live there today, the life of the Christians of the various Churches and denominations, but also that of Jews and Muslims, in order to try to build, in a complex and difficult context such as the Middle East, a fraternal society. .

Communication, in a time of social networks, must help build communities , or better still, fraternity (cf. Message for the World Communications Day 2019 ). I encourage you to tell about the possible fraternity: that between Christians of Churches and confessions unfortunately still separated, but which in the Holy Land are often already close to unity, as I myself have had the opportunity to observe. Telling the possible fraternity between all the children of Abraham, Jews, Christians and Muslims. Telling the ecclesial fraternity that opens up to migrants, displaced persons and refugees, to restore them the dignity they were deprived of when they had to leave their homeland in search of a future for themselves and for their children. Telling that reality.

I thank you because, to tell about the Holy Land, you strive to meet people where and how they are (cf. Message for GMCS 2021). In fact, to carry out your services, your inquiries and your publications you are not limited to the most peaceful territories, but also to visit the most difficult and suffering realities, such as Syria, Lebanon, Palestine and Gaza. I know that you try to present the stories of good, those of active resistance to the evil of war, those of reconciliation, those of restoring dignity to children robbed of their childhood, those of refugees with their tragedies but also with their dreams and their hopes. Thank you because, to do your job in this way, you did not spare the soles of your shoes, and I know that you will not spare them even in the future, in order to be able to tell all this.

Indeed, in communicating a certain reality, nothing can completely replace personal experience, living there. And you live and work in the very place where the Word of God, his message of salvation was made flesh and made "encounterable" in Jesus Christ, not only in his words, but in his eyes, in his voice, in his gestures (see Message for GMCS 2021 ). The attraction of Jesus "depended on the truth of his preaching, but the effectiveness of what he said was inseparable from his gaze, his attitudes and even his silences. The disciples not only listened to his words, they watched him speak. In fact in him - the incarnate Word - the Word became Face, the invisible God allowed himself to be seen, felt and touched [...] (cf. 1 Jn1.1-3). The word is effective only if it is "seen", only if it involves you in an experience, in a dialogue "( ibid . ).

Dear communicators of the Custody of the Holy Land, you are called to make known what the Synod on the Word of God (2008) and then Pope Benedict XVI called "the Fifth Gospel", that is, the land in which the history and geography of salvation they meet and allow for a new reading of the biblical text, in particular of the Gospel texts. There “we can see, indeed touch the reality of the history that God has made with men. Starting with the places of the life of Abraham up to the places of the life of Jesus, from the incarnation to the empty tomb, a sign of the resurrection. Yes, God entered this land, he acted with us in this world "(Benedict XVI, Regina Caeli, May 17, 2009). And the paschal mystery also illuminates and gives meaning to today's history, to the journey of the peoples who live in that land today, a journey unfortunately marked by wounds and conflicts still today, but which God's grace always opens to hope, hope of fraternity and of peace ( cf.ibid . ). Also in this sense, by narrating the Holy Land, you narrate the "Fifth Gospel", what God continues to write in history.

Through the means of social communication you can enrich the faith of many, even those who do not have the opportunity to make a pilgrimage to the holy places. You do this through your professional commitment, carried out every day with competence in the service of the Gospel. This is precious for believers throughout the world and, at the same time, it supports the Christians who live in the Land of Jesus. And I want to take advantage of this opportunity to express my closeness to them. I always remember them, even in prayer. Please, on returning home, take my greetings and my blessing to the families and Christian communities of the Holy Land.

Dear brothers and sisters, may the providence of the Lord and the protection of the Holy Virgin always accompany you in your activity. I cordially impart the Blessing to all of you and to the other collaborators who have not been able to come. And I ask you, from the Holy Land, a prayer for me too. Thank you!