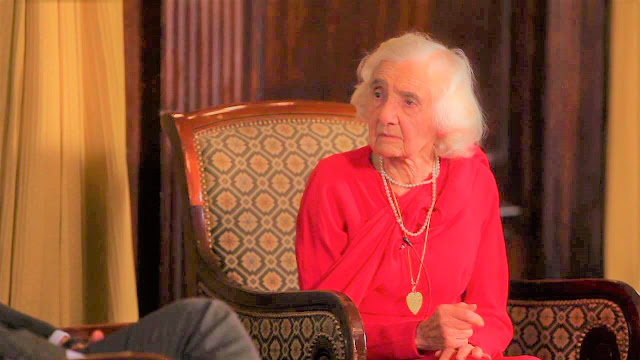 The Belgian, American Catholic philosopher, theologian, lecturer, author, and professor Alice Marie von Hildebrand, has died. Alice was the second wife of Dietrich von Hildebrand, whom she married in 1959, after his first wife died in 1957. Alice von Hildebrand died in the morning of January 14th, 2022. She died peacefully at home after a brief illness.

WATCH Starting at 4:02 Mark on Video Below:

Biography from the Hildebrand Project: Alice Jourdain von Hildebrand was born in Belgium March 11, 1923.  A war refugee, she arrived in New York City in 1940. Soon afterwards she met Dietrich von Hildebrand and began philosophy studies at Fordham University as his student where she took nearly 18 courses with him. Later she became his secretary and collaborated with him in the writing of a number of his books. Starting in 1947, she began teaching at Hunter College in New York City. She was eventually appointed Professor of Philosophy at Hunter where for 37 years she was an extraordinarily successful teacher. Upon her retirement in 1984 she was given a special award for excellence in teaching by Hunter College after she received the highest student evaluation in the College (from among 850 teachers).

Dr. von Hildebrand is the author of numerous books, including Introduction to a Philosophy of Religion, Greek Culture, By Love Refined, By Grief Refined, The Soul of a Lion, The Privilege of Being a Woman, Man and Woman: A Divine Invention, as well as numerous philosophical papers which have been published in such journals and magazines as The New Oxford Review, Homiletic and Pastoral Review, Crisis Magazine, and This Rock. She also writes frequently for the website of Catholic News Agency.

Since her retirement she has been active in the Catholic world as a lecturer on countless topics and her journeys have taken her to South America, Canada, to thirty-five U.S. states, and to many European countries. In addition to her many years at Hunter College, she has also taught at several other institutions, including the Catechetical Institute in Dunwoody, NY, Franciscan University of Steubenville (where she served as a member of the board of trustees for many years), at the Thomas More Institute in Rome, at Ave Maria College in Michigan, and at the Notre Dame Institute in Arlington, VA (today called the Notre Dame Graduate School of Christendom College).

In her very active television career, she has made over eighty appearances on EWTN, broadcast globally to millions of viewers, and two hundred and sixty at the Apostolate for Family Consecration in Ohio, many of them about her husband.

In 2004, Dr. von Hildebrand joined several students of her husband in launching the Dietrich von Hildebrand Legacy Project (www.hildebrandlegacy.org) to ensure the long-term promotion and dissemination of her husband’s life and thought. The Hildebrand Project has received the personal support of no less than His Holiness, Pope Benedict XVI, as well as an array of philosophical and theological luminaries, political leaders, philanthropists, and other distinguished friends.