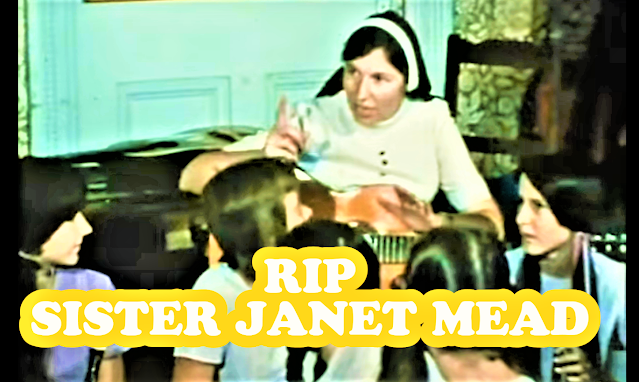 Sister Janet Mead, a Catholic religious sister of the South Australian Mercy Sisters, has died at the age of 84. She became internationally renowned, in 1974, for her rock version of The Lord’s Prayer.  The single was distributed to 31 countries and sold more than 2 million copies worldwide.
She died peacefully after a battle with cancer on January 26, 2022.
The Catholic Archbishop of Adelaide Patrick O’Regan expressed his sadness and acknowledged the “immense contribution” she made through her endeavors for social justice and her work with the homeless, refugees and First Nations people.
South Australian Premier Steven Marshall also posted a tribute on Facebook yesterday, saying he was deeply saddened to learn of the death of Sister Janet.
She entered the Convent in 1955.
Later, Sister Janet taught a range of subjects, including Music and Drama. She produced more than 20 full-scale musicals, many plays and various musical performances and liturgies. She also ran a school orchestra for many years. In 1981, Sister Janet retired from teaching.

Her recording of a rock version of The Lord’s Prayer, was popular in Australia and was distributed to 31 countries - selling over three million copies world-wide. A music video of The Lord’s Prayer was filmed at St Aloysius College. Sr Janet donated all her royalties to charity.
In 2004, Sr Janet received the Yamaha Golden Gospel Award in recognition of her services to Australian Christian Music.
In 1985, the Adelaide Day Centre for Homeless Persons was started. Sr Janet, together with other members of the Romero community, were the driving force behind this initiative. The Adelaide Day Centre assists with emergency housing, runs a mobile soup van and provides an activity program, which includes woodwork, gardening, crafts and living skills.
She was the first Australian artist to have a gold record in the US and was even nominated for a Grammy award but lost out to Elvis Presley.
She introduced the concept of the “Rock Mass” in South Australia and held them regularly in the St Francis Xavier Cathedral in Adelaide.
She continued to teach at St. Aloysius College despite becoming a chart-topping star. She turned down offers to tour the US.
Source: https://thesoutherncross.org.au/news/2022/01/28/tributes-flow-for-sr-janet-mead/