Saint January 17 : Our Lady of Hope (Pontmain) a Pontifically Approved Apparition of Mary from 1871 who said “But pray, my children. God will hear you in a short time." 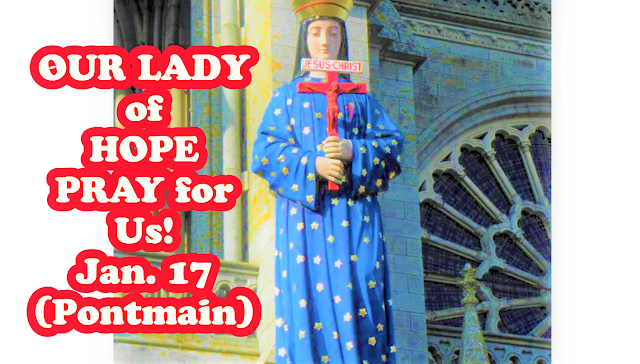 Our Lady of Pontmain, also known as Our Lady of Hope, the title given to the Virgin Mary on her apparition at Pontmain, France on January 17, 1871. These apparitions were approved by Pope Pius IX.
PRAYER: Mother of hope, Our Lady of peace Most gracious Virgin Mary, by your apparition at Pontmain, you remind us of the importance of prayer, you fortified in our hearts the hope and trust in God, and you gave us peace. Listen now with favour to our fervent prayers, so that peace may be restored in our hearts, in our families, in our country and in all nations : PEACE, the fruit of justice, truth and charity. Inflame in our souls the wish to live fully our Christian faith, without any compromise, in all circumstances of our life. Help us to understand our brethren and to love them in God from the depth of our hearts. Amen.
At the time of the apparition Pontmain was a small village, inhabited by simple and hardworking country folk, who were guided by their parish priest Abbé Michel Guérin. The Barbadette family consisted of father César, his wife, Victoire, with their two sons Joseph and Eùgene, aged ten and twelve, and another older boy who was away in the army.

On the evening of 17 January 1871, the two boys were helping their father in the barn when the eldest, Eùgene, walked over towards the door to look out.
As he gazed at the star studded sky he noticed one area practically free of stars above a neighbouring house. Suddenly he saw an apparition of a beautiful woman smiling at him; she was wearing a blue gown covered with golden stars, and a black veil under a golden crown.
His father, brother, and a neighbour came out to look and Joseph immediately said he too could see the apparition although the adults saw nothing. The mother, Victoire, came out but she too could see nothing, although she was puzzled because her boys were usually very truthful. She suggested that it might be the Blessed Virgin, and that they should all say five Our Fathers and five Hail Marys in her honour.
As it was now about a quarter past six, and time for supper, the boys were ordered inside but soon after allowed to go outside again. The Lady was still there and so the local schoolteacher, Sister Vitaline, was sent for. She couldn’t see the Lady, and so she went to fetch three young children from the school to see their reactions.
Immediately they arrived the two older children, two girls aged nine and eleven, expressed their delight at the apparition, describing it as the boys had done, although the youngest child saw nothing.
The adults in the crowd, which had now grown to about sixty people including the priest, could still see nothing and began to say the rosary, as the children exclaimed that something new was happening. A blue oval frame with four candles, two at the level of the shoulders and two at the knees, was being formed around the Lady, and a short red cross had appeared over her heart.
As the rosary progressed the figure and its frame grew larger, until it was twice life size; the stars around her began to multiply and attach themselves to her dress until it was covered with them.
As the Magnificat was being said the four children cried out, “Something else is happening.” A broad streamer on which letters were appearing unrolled beneath the feet of the Lady, so that eventually the phrase, “But pray, my children,” could be read.
Fr. Guérin then ordered that the Litany of Our Lady should be sung, and as this progressed new letters appeared, making the message, “God will soon answaer you.” As they continued to sing, another message was formed, one that removed any doubt that it was the Blessed Virgin who was appearing to the children; “My Son allows Himself to be moved.”
“But pray, my children. God will hear you in a short time. My Son allows Himself to be moved by compassion.”
One of the stars then lit the four candles that surrounded the figure, as the crucifix vanished and the group began night prayers. As these were being recited, the children reported that a white veil was rising from the Lady’s feet and gradually blotting her out, until finally, at about nine o’clock, the apparition was over.
The following March a canonical inquiry into the apparition was held, and in May the local bishop questioned the children, the inquiry being continued later in the year with further questioning by theologians and a medical examination. The bishop was satisfied by these investigations, and in February 1872 declared his belief that it was the Blessed Virgin who had appeared to the children.
Joseph Barbadette became a priest, a member of the Congregation of the Oblates of Mary Immaculate, while his brother Eùgene became a secular priest. He was assisted by one of the girls who had seen Mary as his housekeeper, with the other, Jeanne-Marie Lebossé, becoming a nun. A large basilica was built at Pontmain and consecrated in 1900.
Source: Beevers, The Sun her Mantle, Dublin, 1954.
The children were beside themselves with joy at the beauty of the Lady and her smile, but her expression then changed to one of extreme sadness, as she now contemplated a large red cross that had suddenly appeared before her, with a figure of Jesus on it in an even darker shade of red.
Source: https://ourladyofhope.net/our-lady-of-hope-info/