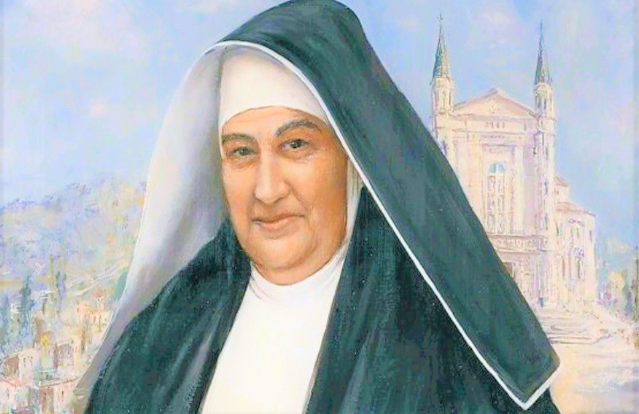 The life of the contemplative nun, Blessed Teresa Fasce, whom we commemorate today, though different from that of most of us, nevertheless illustrates the universal Christian virtues of fidelity to God's will at all costs and the practical implementation of the great commandment of love. Though dedicated to the life of the cloister, Blessed Teresa nonetheless accomplished many good things on behalf of those outside the convent and enjoyed the affectionate love of a grateful people.

Maria Giovanna Fasce was born into a family of means in Torriglia, in the region of Genoa, Italy, on December 27, 1881. As a young girl she received a good education and served as a catechist in her parish church, Our Lady of Consolation, under the care of the Augustinian Friars. Inspired by the example of Saint Rita, she determined to enter religious life and despite many obstacles, entered the convent of Cascia in 1906, taking the name Maria Teresa Eletta. She made her solemn profession in 1912 and served her community as director of novices and vicar. In August, 1920, she was elected abbess and was confirmed in this office nine times throughout the following 27 years until her death. The great ambition of Mother Teresa, which she succeeded in converting into a plan of action, was the enrichment of the religious spirit of her community and of each one of the nuns. Her influence, however, reached far beyond the walls of the cloister by means of the initiatives she undertook to spread devotion to Saint Rita and to promote the well-being of her adopted town. Among these were the publication of the magazine “From the Bees to the Roses”, the establishment of an orphanage for girls, the founding of a seminary for candidates to the Order and the construction of the Basilica as a place of pilgrimage and the fitting resting place of the saint to whom she was so devoted. During the Second World War she courageously protected the convent and defended the rights of the nuns as well as members of the resistance under attack. Throughout her life Mother Teresa suffered many physical ailments, including cancer and a debilitating condition which at times made it difficult for her to walk. All of this she bore with complete resignation and patience and was an example of fortitude and serenity to the nuns and people of Cascia. She died peacefully on January 18, 1947 and was beatified together with Blessed Elías Nieves on October 12, 1997. Her body is venerated in the lower shrine of the Basilica which she made possible.

Mother Teresa Fasce was a cloistered contemplative nun, not only in name, but also in fact, during the several decades of her religious life. At the same time she was a woman of great vision and action, who had the capacity to inspire others even as she was inspired by the life and message of her patroness, Saint Rita. She reminds us that there is no contradiction between contemplation and service: both are motivated by love and must be expressed in love.