Saint January 24 : St. Francis de Sales a Bishop who Consecrated Himself to the Blessed Virgin and Wrote an "Introduction to the Devout Life" 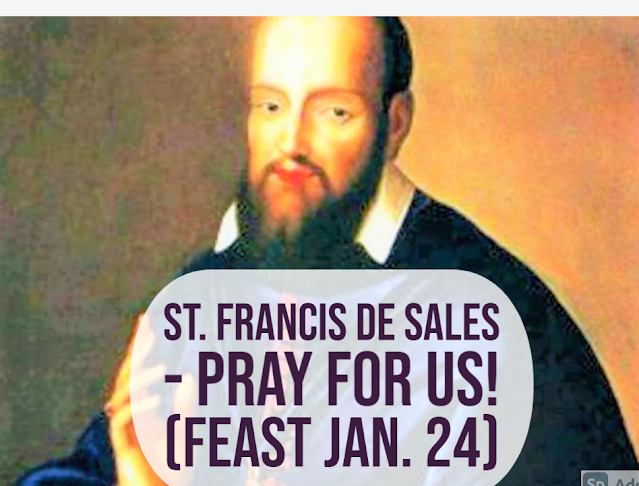 Born: 21 August 1567, Château de Thorens, Savoy
Died:
28 December 1622, Lyon, France
Canonized:
19 April 1665, Rome by Pope Alexander VII
Major Shrine:
Annecy, France
Patron of:
Catholic press; confessors; deaf people; educators; writers; journalists Bishop of Geneva, Doctor of the Universal Church; born at Thorens, in the Duchy of Savoy, 21 August, 1567; died at Lyons, 28 December, 1622.
His father, Francois de Sales de Boisy, and his mother, Francoise de Sionnaz, belonged to old Savoyard aristocratic families. The future saint was the eldest of six brothers. His father intended him for the magistracy and sent him at an early age to the colleges of La Roche and Annecy.
From 1583 till 1588 he studied rhetoric and humanities at the college of Clermont, Paris, under the care of the Jesuits. While there he began a course of theology. After a terrible and prolonged temptation to despair, caused by the discussions of the theologians of the day on the question of predestination, from which he was suddenly freed as he knelt before a miraculous image of Our Lady at St. Etienne-des-Gres, he made a vow of chastity and consecrated himself to the Blessed Virgin Mary. In 1588 he studied law at Padua, where the Jesuit Father Possevin was his spiritual director. He received his diploma of doctorate from the famous Pancirola in 1592. Having been admitted as a lawyer before the senate of Chambery, he was about to be appointed senator. His father had selected one of the noblest heiresses of Savoy to be the partner of his future life, but Francis declared his intention of embracing the ecclesiastical life. A sharp struggle ensued. His father would not consent to see his expectations thwarted. Then Claude de Granier, Bishop of Geneva, obtained for Francis, on his own initiative, the position of Provost of the Chapter of Geneva, a post in the patronage of the pope. It was the highest office in the diocese, M. de Boisy yielded and Francis received Holy Orders (1593).