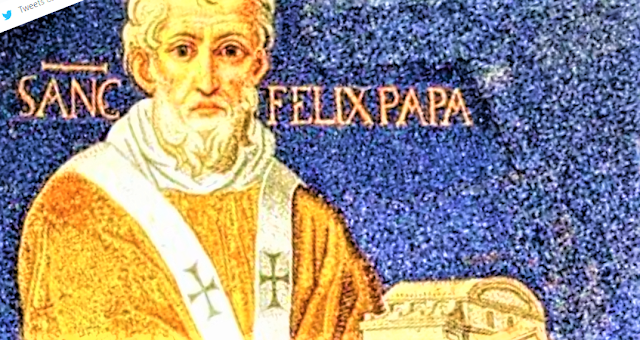 (Reigned 526-530).
On 18 May, 526, Pope John I died in prison at Ravenna, a victim of the angry suspicions of Theodoric, the Arian king of the Goths. When, through the powerful influence of this ruler, the cardinal-priest, Felix of Samnium, son of Castorius, was brought forward in Rome as John's successor, the clergy and laity yielded to the wish of the Gothic king and chose Felix pope. He was consecrated Bishop of Rome 12 July, 526, and took advantage of the favor he enjoyed at the court of Theodoric to further the interests of the Roman Church, discharging the duties of his office in a most worthy manner. On 30 August, 526, Theodoric died, and, his grandson Athalaric being a minor, the government was conducted by Athalaric's mother Amalasuntha, daughter of Theodoric and favorably disposed towards the Catholics. To the new ruler the Roman clergy addressed a complaint on the usurpation of their privileges by the civil power. A royal edict, drawn up by Cassiodorus in terms of the deepest respect for the papal authority, confirmed the ancient custom that every civil or criminal charge of a layman against a cleric should be submitted to the pope, or to an ecclesiastical court appointed by him. A fine of ten pounds of gold was imposed as a punishment for the violation of this order, and the money thus obtained was to be distributed amongst the poor by the pope (Cassiodorus, "Variae", VIII, n. 24, ed. Mommsen, "Mon. Germ. Hist.: Auctores antiquiss.", XII, 255) The pope received as a gift from Amalasuntha two ancient edifices in the Roman Forem, the Temple of Romulus, son of the Emperor Maxentius, and the adjoining Templum sacroe urbis, the Roman land registry office. The pope converted the buildings into the Church of SS. Cosmas and Damian, which still exists and in the apse of which is preserved the large and magnificent mosaic executed by order of Felix, the figure of the pope, however, being a later restoration (see COSMAS AND DAMIAN). Felix also took part in the so-called Semipelagian conflict in Southern Gaul concerning the nature and efficiency of grace. He sent to the bishops of those parts a series of "Capitula", regarding grace and free will, compiled from Scripture and the Fathers. These capitula were published as canons at the Synod of Orange (529). In addition Felix approved the work of Caesarius of Arles against Faustus of Riez on grace and free will (De gratia et libero arbitrio). Rendered anxious by the political dissensions of the Romans, many of whom stood for the interests of Byzantium, while others supported Gothic Rule, Felix IV, when he fell seriously ill in the year 530, wished to ensure the peace of the Roman Church by naming his successor. Having given over to Archdeacon Boniface his pallium, he made it known publicly that he had chosen Boniface to succeed him, and that he had apprised the court of Ravenna of his action ("Neues Archiv", XI, 1886, 367; Duchesne, "Liber Pontificalis", I, 282, note 4). Felix IV died soon afterwards, but in the papal election which followed his wishes were disregarded (see BONIFACE II). The feast of Felix IV is celebrated on 30 January. The day of his death is uncertain, but it was probably towards the end of September, 530.
Source: The Catholic Encyclopedia