Saint January 6 : St. André Bessette a Brother and Builder of the Largest Church to St. Joseph in the World 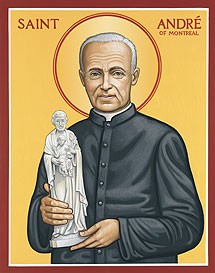 BIOGRAPHY OF SAINT BROTHER ANDRÉ
Holy Cross Brother, known as "Frere Andre," has been associated with thousands of cures. He was the founder of St. Joseph's Oratory in Montreal, Canada, which is the world's largest shrine in honor of St. Joseph. He died at the age of 91, then it was estimated that close to a million people came to the Oratory to pay their last respects.

AUGUST 09, 1845
Birth of Alfred Bessette on Grand-Bois Lane in Saint-Grégoire d’Iberville, son of Isaac Bessette and Clothilde Foisy. The very next day, he is baptised in the “chapel/rectory” of Saint-Grégoire Parish by Father Pierre-Albert Sylvestre.
1850 The Bessette family moves to Farnham, Québec. Tragically, Isaac dies, crushed under an axed tree, February 20, 1855. His wife Clothilde dies on November 20, 1857.Alfred, aged 12, moves to Saint-Césaire and receives the Sacrament of Confirmation by Bishop Prince, Bishop of Saint-Hyacinthe. A photo of Alfred is taken for the occasion. Alfred works on a farm, and tries his hand (without much success) at the trades of 1863 Alfred emigrates to the United States and works in textile mills in Connecticut and possibly in Massachusetts and in Rhode Island. 1867 He returns to Quebec. After a stop in Sutton and then in Farnham, he settles at Saint-Césaire where he connects with the pastor, Father André Provençal who introduces him to the idea of religious life.
DECEMBER 27, 1870 Alfred becomes a postulant of the Congregation of Holy Cross in Montreal. On December 27, he enters the novitiate; from then on he is known as Brother André, CSC, in memory of Father André Provençal.
DECEMBER 20, 1871 He is given the obedience of “doorkeeper, infirmarian, and lamp tender” at Collège Notre-Dame. His duties also include running errands, caring for the garden, cutting students’ hair, managing the laundry and working as general factotum. 1872
AUGUST 22, 1872 He makes first vows. 1874
FEBRUARY 02, 1874 Brother André pronounces his final vows at the age of 28 and a half years. 1878 He greets sick people in the lobby of the school, provoking scorn, complaints, and controversy.
1878 Publication in a French magazine of anecdotal cures by a Brother André using oil taken from a lamp.
1896 Purchase by the Congregation of Holy Cross of the mountain property across the street from the Collège. Brother André dreams of putting up a wayside chapel there, dedicated to Saint Joseph. 1904 OCTOBER 19, 1904 Blessing of a modest chapel: Saint Joseph’s Oratory of Mount Royal is founded. 1909 Assigned as full-time caretaker of Saint Joseph’s Oratory, Brother André leaves the Collège after almost 40 years of service. From 1909 to 1936, he greets thousands at his Oratory office, who come seeking hope, reassurance, or even healing. JANUARY 06, 1937 Death of Brother André at 91 years of age, at the hospital in Saint-Laurent. A million persons file past Brother André’s coffin from January 6 to 12. NOVEMBER 07, 1940 Opening the cause for the beatification of Brother André.
NOVEMBER 09, 1960 Decree concerning the introduction of the cause in the Roman Tribunal, by Pope John XXIII. JUNE 12, 1978 Paul VI declares Brother André “Venerable”, thereby recognizing the heroicity of the virtues of the Servant of God. 1982
MAY 23, 1982 Beatification of Brother André in Rome, by Pope John Paul II.
OCTOBER 17, 2010 The solemn Rite of Canonization of Brother André in Rome. Pope Benedict XVI introduces Saint André Bessette to the Universal Church. Text shared from Oratory of St. Joseph

Anonymous said…
During the 1950’s, as a child, my mother made pilgrimages to St Joseph Oratory from America. She took me with her to pray for her father, my grandfather, who had lung cancer. We said the rosary on our knees going up each step into the Oratory. Once inside the awe-inspiring gigantic church you could feel the holiness of St. Joseph because of the miracles worked through Brother André. The gigantic pillars that held up the roof were filled with crutches, leg braces and other physical aid devices. Our trips to Montreal were inspiring.
On my wedding honeymoon we went to Montreal and I shared St Joseph’s Oratory with my new husband. Thank you for this lovely story of Brother André’s life.
January 5, 2022 at 11:17 PM