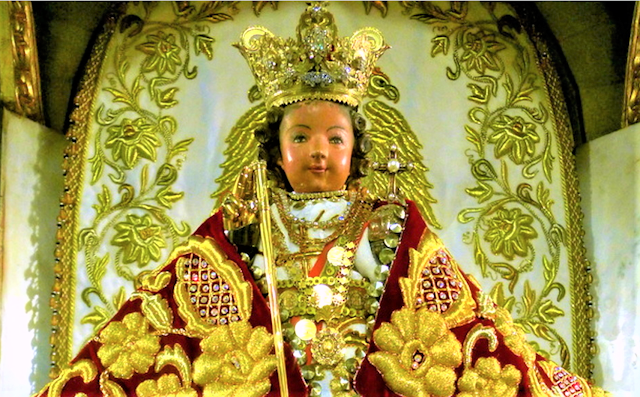 The Santo Niño de Cebú is title of the Child Jesus associated with a religious image of the Christ Child widely venerated as miraculous by Filipino Catholics. The feast is celebrated on the 3rd Sunday in January; it was moved from April 28 by Pope Innocent XIII.  (A similar statue is honored in the Europe The Divine Infant of Prague)
SEE ALSO- Novena to Santo Nino de Cebu - Miracle Prayer to the Divine Child Jesus https://www.catholicnewsworld.com/2022/01/novena-to-santo-nino-de-cebu-miracle.html
It is the oldest Christian artifact in the Philippines, originally a gift from explorer Ferdinand Magellan to Rajah Humabon in 1521. The dark wood statue measures approximately twelve inches tall, and carved in the Flemish style. It depicts the Child Jesus, with a serene countenance, in the attitude and dress of a Spanish monarch.
The statue bears imperial regalia, including a golden crown, globus cruciger, and various sceptres, wears fine vestments, and possesses jewelry mostly offered by devotees over several centuries.
Pope Paul VI granted a decree of Canonical Coronation “Aurora Praenuntia Felicis Successus” dated 25 March 1965 that was granted to the Cardinal Ildebrando Antoniutti which was executed on 28 April 1965. The same Pontiff later raised its shrine to the status of Minor Basilica on 2 May 1965 via his Papal bull Cubanula Religionis to mark the fourth centenary of Christianity in the Philippine Islands.
The annual dancing feast of Sinulog is held on 16 January every year in its honor. Today, the original image is permanently encased behind bulletproof glass inside its chapel within the Basilica del Santo Niño. History
The Santo Niño de Cebú was originally produced by Flemish artisans, according to a hagiography. In early 1521, a Spanish expedition ordered by King Charles V and led by Ferdinand Magellan was on a voyage from Spain to find a westward route to the Spice Islands. After crossing the Atlantic and Pacific Oceans, in April 7, 1521, they landed in Limasawa, Southern Leyte, and met a local ruler named Raja Kulambu, who introduced him to Rajah Humabon, ruler of Cebu Island, and his chief consort, Hara Humamay. On April 14, 1521, Magellan presented them with three gifts: a bust of Christ as the Ecce Homo, an image of the Blessed Virgin Mary, and the Santo Niño as part of their baptism and strategic alliance.
The feast, locally known as Fiesta Señor, starts on the Thursday after the Solemnity of the Epiphany.
Each year, the celebration starts with a dawn procession wherein the replica image of Santo Niño de Cebú is brought down to the streets. It is then followed by the novena Masses, which span nine days. On the last day of the novena, another dawn procession is held wherein the image of Nuestra Señora de Guadalupe de Cebú is removed from its shrine and brought to the Basílica Menor.
After the procession, it will stay for a while in the Basilica. Then, the images of Santo Niño de Cebu and Nuestra Señora de Guadalupe de Cebú are brought to the National Shrine of St. Joseph in Mandaue City to be reunited with the icon of the church's namesake, thus forming the Holy Family. This transfer, which is common in fiestas throughout the country, is called Traslación.
On the morning of the vísperas ("eve", i.e., the day before) of the feast, the images of Santo Niño de Cebu and Nuestra Señora de Guadalupe de Cebú are brought back to Cebu City in a fluvial procession that concludes with a reenactment of the first Mass and baptism in the islands. It is then followed by a grand yet solemn foot procession in the afternoon, culminating in a Pontifical Mass concelebrated by bishops and priests. The grand Sinulog Festival is then held on the following Sunday.
Edited from Wikipedia