Wow 9-Year-Old Boy who Ran to Give Pope Francis a Hug at World Youth Day in 2013 Now is Training to Become a Priest! 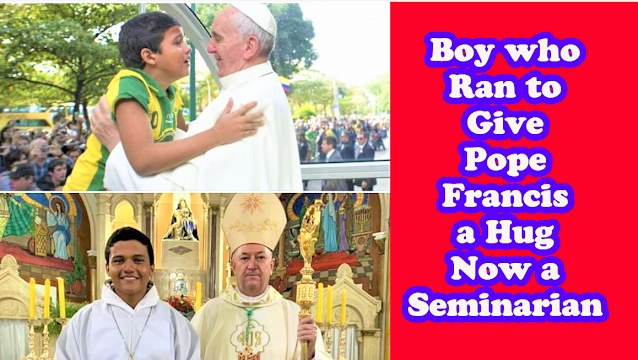 In 2013, during World Youth Day in Brazil a young boy spontaneously embraced Pope Francis; who was moved to tears by the encounter. A Diocese has reported that the boy, Nathan de Brito has entered the seminary.
Share this to Inspire someone to a Vocation for Jesus!

This was one of the most iconic pictures of the World Youth Day of 2013. Nathan then 9 years old embracing the Pope in Rio de Janeiro. The boy had made his way to the pope mobile through barriers to let the Pope know he wanted to become a priest.
Pope Francis had assured him of his prayers. The Pope said, "As of today, your vocation is set." After eight years, Nathan is today pursuing a religious vocation. He is now a Postulant of the Order of Friars Minor in Rondonópolis, Mato Grosso, Brazil. Bishop Dom Joaquim Wladimir Lopes Dias of the Diocese of Lorraine, São Paulo, showed a picture of himself with seminarian Nathan on Facebook. Nathan was wearing a pectoral cross similar to the one worn by Pope Francis.