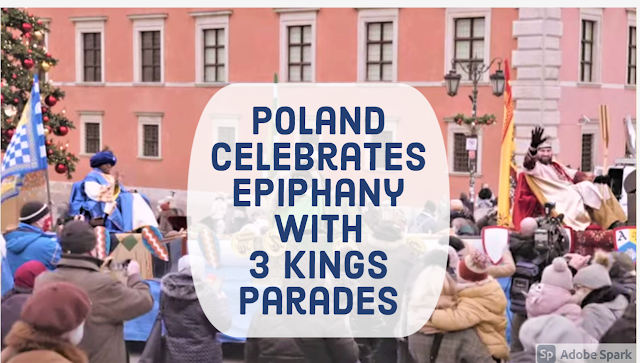 The traditional procession of the Magi in Poland on Epiphany usually brings over a million people to the streets. On January 6th the faithful in Poland gathered to honor the the feast day.

They sang Christmas carols, and baby Jesus appeared with Mary and Joseph.

Traditionally there is a collection of funds for the Work of Help of St. Padre Pio,  which helps people experiencing homelessness and those at risk.

The processions featured worshippers of all ages, singing carols and wearing paper crowns. There was also actors in costume portraying the three Magi from the Bible—Caspar, Melchior and Balthasar.

In one of the largest such events, crowds of residents gathered in the capital Warsaw to take part in an annual march from the city’s landmark Castle Square to the central Piłsudski Square, state news agency PAP reported.

“The theme of this year's Epiphany was the good preparation and the deep experience of Christmas and Epiphany. The scripts spoke of the importance of understanding the actual content of the festival, ”said Anna Murawska, screenwriter and director of the procession.

As the organizers emphasize, the processions are a form of street evangelization in the cities. "The wise men from the East who studied nature and the cosmos and were looking for the truth found the truth in the little child," explains Piotr Giertych, President of the "Epiphany" foundation.

Poland’s President Andrzej Duda and First Lady Agata Kornhauser-Duda released a special message to thank those taking part for keeping the tradition alive.
Duda said in the message that the annual event was "a gathering of people who are kind and open to anyone who wants to join them."

The Feast of the Epiphany, also known as Three Kings' Day, is one of the oldest and most important holidays in the Roman Catholic Church, and a public holiday in Poland.

Edited from theNews.pl and Kath.net