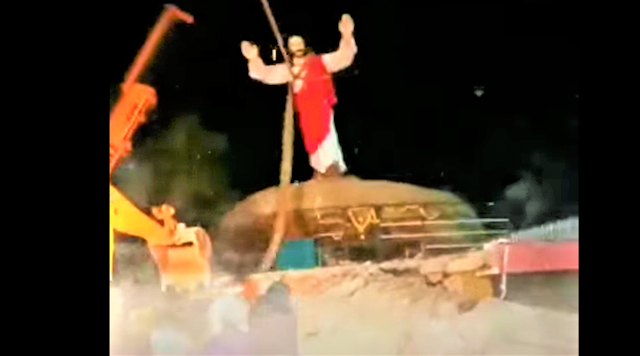 The government in India’s state of Karnataka destroyed a 20-foot-tall statue of Jesus, that was erected in the village 18 years ago. The Archbishop of Bangalore, Rev. Dr. Peter Machado issued a statement condemning the governments actions. The government claims it was built on land preserved for an animal pasture.  The Karnataka High Court had ordered the destruction, however local Christian leaders said the case was still pending.
Excerpts from the Archbishop's statement: “It is sad to note that yet another ruthless demolition of a Christian Structure, which included a 20- feet Statue of Jesus and 14 Stations of Cross was carried out by the taluka authorities in a Christian Village, Gokunte, in Kolar (65 km from Bangalore), a District of Karnataka touching the border of Andhra. Though the Church has documents of the two acres of the land where these structures were located, the local authorities considered them as not proper or incomplete. The matter is still being heard in the Courts. In fact, the trial court had issued a stay order on the demolition, prior to the High Court’s directives”.
Archbishop Dr Peter Machado also explained, “In spite of the stay order and our best efforts to help the local Tehsildar Shobitha, to understand the directives of the court, she refused to cooperate and even to share the fresh directives of the court, if any. We were not served with written notice of the impending action which she had determined to demolish. Armed with 200 strong police forces, she supervised the demolition till midnight of 14th February 2022 and pulled down the 20ft Statue to the ground, which has seriously affected not only the sentiments of the Christian community but also the people of other faiths. It was heartbreaking to see hundreds of people shedding their tears. Even assuming that the structures were not fully authorised, Government agencies could have had the magnanimity to regularise these structures, which were in place for over 25 years. Isn’t the Karnataka Government recently introduced a bill to protect unauthorised religious structures built on government lands not being demolished in Karnataka? Is this privilege applies only to certain religious groups and not to minority communities?” questioned Archbishop.
“Are there no other communities of other religions who have illegal structures on public or government properties? Why this discriminatory attitude towards the Christian Community only? What was the tearing hurry to initiate this action? Are there the pressures from fundamentalist groups who were bent on the demolition of these Christian structures? Does the government have any control over such fringe elements? The place that witnessed the demolition was a peaceful area where even the members of other religious communities were visiting the place to offer prayers and petitions. We are told that the people who created the problems were outsiders whose main aim was to spoil the peace and harmony in and outside the village”, said Archbishop.
“In the last two years, we have seen demolitions occurring at six such places on the hills, and systematic attacks on the Churches across the State. These religious places were patronised and maintained as places of devotion in Bangalore, and its surroundings for decades. In the context of the Anti-Conversion Bill that is being much discussed, it is too big an expectation from the Government for any act of benevolence to the Christian Community. We only fear that much more such harsh, orchestrated and insensitive attacks are sure to happen in the coming days. Notwithstanding, we still hope and pray that the government will protect our places of worship, religious symbols and sacred structures, and that it does not continue to hurt the religious sentiments of Christian minority”, said Archbishop Dr. Peter Machado.
Sources: https://www.vaticannews.va/en/church/news/2022-02/india-archbishop-machado-statue-jesus-demolition-attacks.html
https://www.mangalorean.com/archbishop-dr-peter-machado-condemns-demolition-of-jesus-statue-in-kolar/