Catholic Bishops of Russia Call for Peace and Ask All to Pray and Fast "We call on all politicians on whom this decision depends to do everything resolutely to end this conflict." 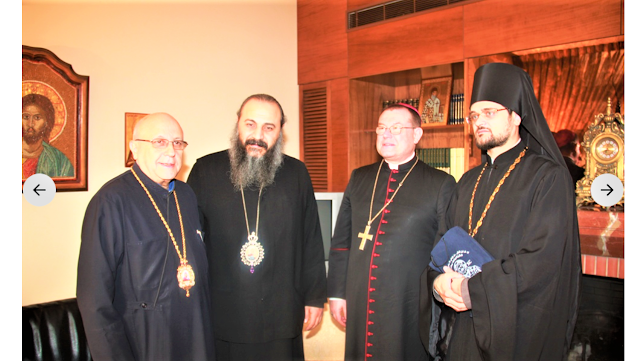 Address of the Conference of Catholic Bishops of Russia
Moscow, February 24, 2022
Beloved brothers and sisters in Christ,
dear brothers in the priesthood!
We, like all of you, are deeply shocked that, despite huge efforts at reconciliation, the political conflict between Russia and Ukraine has turned into an armed confrontation. This confrontation brings death and destruction and threatens the security of the entire world. The peoples of our countries are united not only by a common history, but also by a common great suffering that has befallen us in the past because of the madness of war. Our peoples deserve peace, and not only the absence of war, but peace that consists in a firm determination to respect other people, other peoples and their dignity. Let our contemporaries know that they will have to give a strict account of the military actions they have taken. After all, the course of the coming centuries largely depends on their current decisions (cf. Const. Lumen gentium , 78, 80).
We call on all politicians on whom this decision depends to do everything resolutely to end this conflict. “God is a God of peace, not of war, the Father of all, not just a few, and He wants us to be brothers, not enemies,” Pope Francis addresses us. And we also appeal to all people, especially to fellow Christians, with a call to resist lies and hatred, and to be a source of reconciliation, not an increase in hatred and violence.
We ask all our believers to dedicate these days to intense prayer and fasting for the sake of saving human lives - especially on Ash Wednesday, March 2, in response to the call of the Holy Father. We ask the priests to celebrate the Holy Mass for the preservation of peace and justice, using the Eucharistic Prayer for Reconciliation, and reading the prayer from the breviary "For Peace and Fatherland."
Conference of Catholic Bishops of Russia
Archbishop Pavel Pezzi
Metropolitan of the Archdiocese of the Mother of God in Moscow
Chairman
Bishop Joseph Werth
Ordinary of the Diocese of Transfiguration in Novosibirsk
Bishop Clemens Pikkel
Ordinary of the Diocese of Saint Clement in Saratov
Bishop Kirill Klimovich
Ordinary of the Diocese of Saint Joseph in Irkutsk
Bishop Nikolai Dubinin
Auxiliary Bishop of the Archdiocese of the Mother of God in Moscow
Source: http://catholic-russia.ru/2022/obrashhenie-konferenczii-katolicheskih-episkopov-rossii/