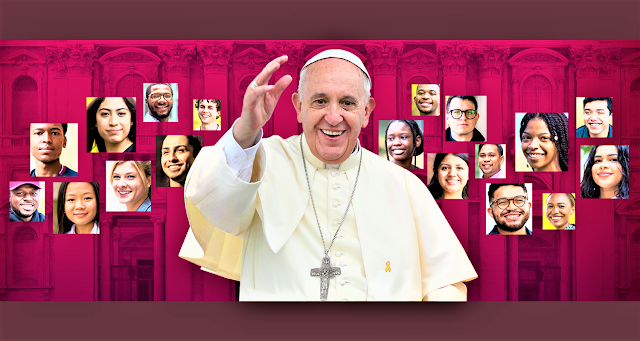 University students from the Americas connects with Pope Francis for about an hour and a quarter, to discuss education, migration, environmental sustainability, economic justice and integral human development in a synodal manner.
Scheduled for Thursday, 24 February at 7 pm CET- 1pm EST  the event foresees an open conversation between the students, the Pope and to talk about building a world made of bridges and collaboration in the spirit of Fratelli tutti.
A number of migrants will also be linked up to give their fundamental perspective.
The event was produced and organized by the Department of Theology of Loyola University in Chicago in collaboration with the Pontifical Commission for Latin America, the Institute of Pastoral Studies and the Hank Center for the Catholic Intellectual Heritage.
Building Bridges
Organized in four blocks pertaining to different geographical regions,  the students will present their projects and works to the Pope and ask questions about the present and future of their country, their generation, and their lives.
The Pope will answer each question and help them define a constructive path that foresees the “Building of Bridges”.
In concrete, this means “facilitating authentic and constructive dialogues between those who have crossed geographic, cultural and social borders, working on projects and supporting the skills of each individual in order to build lasting relationships that lead to understanding, compassion and wisdom.”
'Pope excited to dialogue with young people'
Initial presentations of the event are entrusted to Cardinal Blaise Cupich, Archbishop of Chicago, and to Argentine theologian Emilce Cuda, who was recently appointed as Secretary of the Pontifical Commission for Latin America.
It is thanks to Professor Cuda that Pope Francis has been involved in this event, which was born as a youth initiative to give concrete form to the Pontiff's invitation to be a synodal Church in dialogue.
Among the young people who will dialogue with the Pope, there are also some who have been forced to leave their homes.
They will bring the perspective not only of those who cross borders in the quest for a life of hope and dignity but also of those who are displaced within their own nations and who do not have any kind of protection.
A particular group of migrants is that of people who are on the move within Latin America or from the Caribbean countries, and that includes many children and students.
Edited from Vatican News