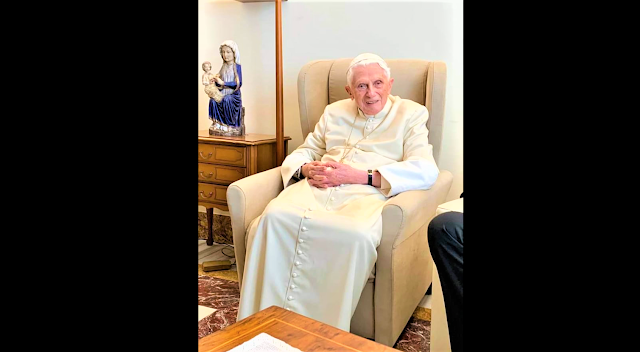 Here you will find the "fact check" with which the staff of Pope Emeritus Benedict XVI. address the allegations made in the independent report on cases of abuse in the Archdiocese of Munich and Freising, in full.

It is claimed:
Benedict XVI I made a deliberate false statement about his presence in the Ordinariate meeting on January 15, 1980, that he had lied.
That's wrong. Correct is:
The statement in Benedict XVI's statement that he did not take part in the Ordinariate meeting on January 15, 1980 was wrong. Nevertheless, Benedict XVI. not lying or knowingly misrepresented:
Benedict XVI was assisted by a team of staff in drafting the Opinion. This consists of attorney Dr. Carsten Brennecke (Cologne) and the canonical staff Prof. Dr. dr Stefan Mückl (Rome), on behalf of Benedict XVI. who inspected the files, Prof. Dr. dr Helmuth Pree and Dr. Stefan Korta. The employees were brought in because Benedict XVI. could not process the number of questions alone in the short time available, and the law firm commissioned with the expert opinion asked questions relating to canon law, so that a canon law classification was required for an answer. Only Prof. Mückl was granted electronic file inspection without being able to save, print out or copy documents. No other employee could see the files. After the data of the file inspection (8,000 pages) had been prepared by Prof. Mückl, Dr. Korta an unnoticed transmission error in one of the further work steps. dr Korta erroneously recorded that Joseph Ratzinger was absent from the Jan. 15, 1980 Ordinariate meeting. The employees did not notice this mistakenly incorrect entry of the absence. You have relied on the erroneously incorrect information and Benedict XVI. not actively asked whether he was present at this meeting. Rather, it was assumed that Joseph Ratzinger was not present, according to the incorrectly transmitted log. Benedict XVI did not recognize this error due to the great time pressure under which his review of the statement was necessary in a few days due to the tight deadline set by the experts, but relied on the supposed written record of his absence.
"This transmission error can be attributed to Benedict XVI. do not charge as knowingly misrepresenting or "lying""
Nor would it have made sense that Benedict XVI. intentionally denies his presence at the meeting: Statements by Joseph Ratzinger were recorded in the minutes of the meeting. The presence of Joseph Ratzinger was thus obvious. In addition, as early as 2010, several press articles reported - unchallenged - that Cardinal Ratzinger was present at the meeting. The same applies to a biography about Benedict XVI that was published in 2020. fixed. There it says: "As bishop, at a meeting of the Ordinariate Council in 1980, he only agreed to let the priest in question come to Munich for psychotherapy." (Peter Seewald, Benedikt XVI., Droemer Verlag 2020, page 938).
Benedict XVI was Pope from 2005 to 2013
It is claimed:
In addition, the report burdens Benedict XVI. in three other cases with a misconduct. In these cases, too, he knew that the priests were abusers.
That's wrong. Correct is:
In none of the cases examined by the expert report was Joseph Ratzinger aware of any acts or suspicions of sexual abuse by the priests. The report presents no evidence that it is otherwise.
Regarding the publicly discussed case of Priest X., whose placement for therapy was discussed at the Ordinariate meeting in 1980, even one of the experts at the press conference on January 20, 2022 for the presentation of the abuse report confirmed that there was no evidence of knowledge of Joseph Ratzinger : When asked by a journalist whether the experts could prove that Joseph Ratzinger had knowledge that priest X. had committed sexual abuse, the expert clarified that there was no proof of knowledge of Joseph Ratzinger. That was only "predominantly likely" according to the subjective opinion of the experts.
The press conference is available at the following link:
PK Gutachten "Sexueller Missbrauch durch Kleriker im Bereich der Erzdiözese München und Freising von 1945 bis 2019"
from Westpfahl Spilker Wastl RAe on Vimeo.
At minute 2:03:46 the journalist asks: “My question also relates once again to the case of priest X. Can the chancellery prove that Cardinal Ratzinger was really informed at the time that priest X. was a perpetrator was? What does "predominantly likely" mean in this context? (...)
One expert replies: "(...) "Most likely" means: We assume it with a high degree of probability. (...)"
The report contains no evidence of an allegation of misconduct or assistance in a cover-up.
As Archbishop, Cardinal Ratzinger was not involved in any cover-up of abuse.
"The sentence, which serves as supposed evidence for a trivialization of exhibitionism, has been taken out of context"

It is claimed:
Benedict XVI have downplayed exhibitionist actions in the statement. The statement in the statement serves as evidence of this: "Pastor X was noticed as an exhibitionist, but not as an abuser in the strict sense."
That's wrong. Correct is:
Benedict XVI did not play down exhibitionism in the statement, but expressly condemned it. The sentence, which serves as supposed evidence of a trivialization of exhibitionism, has been taken out of context.
Benedict XVI says in the statement in no uncertain terms that the acts of abuse, including exhibitionism, are "terrible," "sinful," "morally reprehensible," and "irreparable." It was only stated in the canon law assessment that under the law applicable at the time, according to the canon law staff, exhibitionism was not a canon law crime, since the relevant penal provision did not factually cover such behavior.
Thus, the statement of Benedict XVI. Exhibitionism not downplayed, but clearly and unequivocally condemned.
This fact check was created by the employees in the German version. Should there be any linguistic deviations in the course of the translation, the German version shall prevail.
Prof. Dr. dr Stefan Mückl (Rome) (canon law)
Prof. i. R Dr dr Mag. Helmuth Pree (LMU Munich) (canon law)
dr Stefan Korta (Buchloe) (canon law)
Attorney Dr. Carsten Brennecke (Cologne) (right of expression)
Translation from https://www.vaticannews.va/de/vatikan/news/2022-02/faktencheck-ratzinger-benedikt-xvi-gutachten-muenchen-missbrauch.html