Saint February 1 : Blessed Benedict Daswa of South Africa who Refused to Believe in Witchcraft and was Martyred 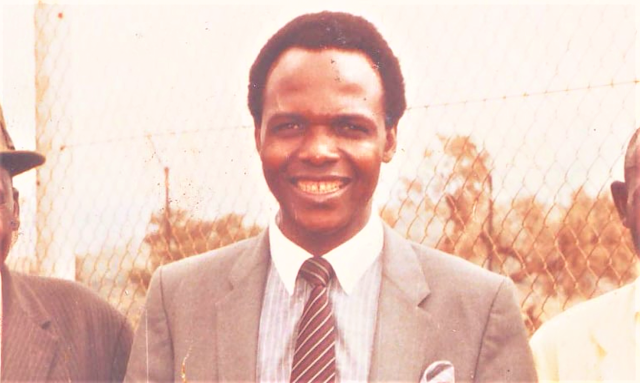 Benedict Daswa’s full name was Tshimangadzo (traditional name meaning miracle or wonder and very fitting in view of future events), Samuel (English name given at birth), Benedict (baptismal name), Daswa (family name) and finally Bakali (Lemba clan name). He was born on the 16th June 1946 in the small village of Mbahe about 20 kms from Thohoyandou, the capital of the old Venda “Homeland” in the Province of Limpopo in South Africa. His birthday immediately brings to mind the uprising against the Apartheid government in 1976 in which many young people lost their lives. It is now kept as a public holiday called Youth Day.

Patron: Against the occult Against witchcraft, Persecuted Christians, Teachers Principals Fathers
Benedict was the eldest of five children – four sons and one daughter – of the late Mr Tshililo Petrus Daswa and Mrs Thidziambi Ida Daswa (nee Gundula). Three of them are still living: two sons, Thanyani Mulimisi Mackson and Muvhulawa Calson as well as the daughter Thinavhuyo Mavis Muthige. The other son, Humbulani Innocent, passed away in 2008.
Daswa was exposed to Roman Catholicism through a friend he met while in Johannesburg while living with an uncle there.

Prayer: O Blessed Trinity, you filled the heart of Blessed Benedict Daswa with great love and zeal for building up your kingdom. You chose him and gave him the courage and strength to stand up for his faith without fear and to bear witness to it even unto death.  Loving God, like him, may we always proclaim  the truth of the Gospel of the Lord Jesus Christ by the witness of our life. Keep us away from all deeds of darkness; protect us from evil spirits and the powers of evil. Make us true apostles of life in our families and in society. Father, through Blessed Benedict Daswa’s intercession and if it accords with your will, grant us this grace which we now ask of you … (State your intentions…) May we always draw strength and courage from the life of your Servant Benedict Daswa  whom we in South Africa venerate as our intercessor and model of holiness. Through Christ our Lord. Amen (https://zulumissions.co.za/prayer-to-implore-favours-through-the-intercession-of-blessed-tshimangadzo-samuel-benedict-daswa/)
He learnt about the Catholic faith and learnt catechism every Sunday from Benedict Risimati. After two years of instruction, Daswa was baptized on 21 April 1963 by the priest Augustine O'Brien. He took the name of "Benedict" due to the fact that he was inspired by Benedict of Nursia, also selecting as his life motto "Ora et labora" (pray and work). He was confirmed by Abbot Bishop F. Clemens van Hoek three months later on 21 July 1963. He became an active member of the Catholic Church in South Africa. Daswa went to Venda Teacher Training College to do a primary teacher's certificate and later obtained his matriculation through correspondence in 1973. He served as a teacher and catechist as he worked with adolescents and he assisted families that endured economic hardship. Daswa was a highly respected individual in his local community and became known for his honesty, truthfulness and integrity, even known to fetch students who decided to skip schools. Daswa later helped to build the first church in his area and later became the principal of the school that he taught at on 1 January 1979 at Nweli Primary School. He once convinced a father who wanted to marry off his daughter to an older man to allow the girl to complete her education.Daswa married Shadi Eveline Monyai (d. 2008) in 1974 and the pair had a total of eight children, including Lufuno (b. 1977) who was the eldest, Benedicta (b. 1990), Helen and Faith. He would help his wife with household chores, unheard of at that time in his area, and he valued his family to the point of hosting Daswa Family Days each 16 December where gifts would be exchanged and a meal held.For his family, he personally built his brick house. Daswa also established a soccer team called the Mbahe Eleven Computers and left this team when members wanted to use "muti" (medicine) in order to win games. He started a new team, Mbahe Freedom Rebels. He was an active member of his community, serving as the secretary of the local traditional council; the local chief valued his counsel. In November 1989, heavy rains and lightning strikes plagued the area. When his village suffered strong storms again in January 1990, the elders decided that the lightning occurred due to magic and thus demanded a tax from all their residents to pay for a sangoma to "sniff out" the witch who caused the storms. Refusing to believe this, Daswa said they were just a natural phenomenon and declined to pay the tax. On 2 February 1990, Daswa drove his sister-in-law and her sick child to a doctor in Thohoyandou and en route, picked up a man who asked for his help to take a bag of mealie meal to his home in a town next to Mbahe. At around 7:30pm, he returned to Mbahe where he left his sister-in-law and child near their home. He told his daughter that he would soon return after taking the passenger to the next village. Returning home, found his path blocked by fallen trees and as he attempted to clear the road he was ambushed by a mob of young men. Bleeding as a result of stoning, he left his damaged car and ran for assistance at a woman's hut. However, the woman revealed where he was when the mob threatened to kill her if she did not comply. As a result of this, he was beaten and clubbed over the head. Boiling water was poured over him in his ears and nostrils after he was attacked to ensure that he was dead. His final words were, "God, into Your hands receive my spirit". The woman of the hut informed Daswa's brother what had happened and the latter remained with his dead brother for the night. Post-mortem The funeral took place on Saturday, 10 February 1990. The funeral procession commenced at Daswa's home and then proceeded to Nweli Church. Celebrants wore red vestments to indicate their belief that Daswa died at the hands of his attackers in hatred of his faith. Daswa's mother later converted to Roman Catholicism and saved her pension to purchase a tombstone for her murdered son. This was unveiled after a special Mass on 26 November 2000. Daswa's remains were later transferred to Nweli Church on 24 August 2015.
The Church has now added Benedict Daswa to this growing list of modern Saints and Martyrs in Africa.