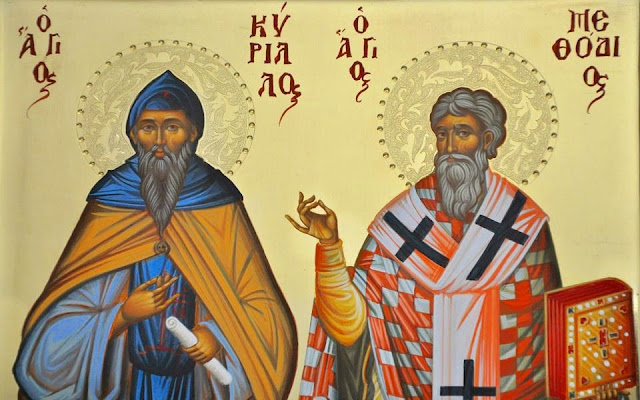 Born: 827 and 826, Thessaloniki, Byzantine Empire (present-day Greece)Died:
February 14, 869 and 6 April 885
Patron of:
Bulgaria, Czech Republic (including Bohemia, and Moravia), Ecumenism, unity of the Eastern and Western Churches, Europe, Slovakia
PRAYER:
Father,
you brought the light of the gospel to the Slavic nations
through Saint Cyril and his brother Saint Methodius.
Open our hearts to understand your teaching
and help us to become one in faith and praise.
Through our Lord Jesus Christ, your Son,
who lives and reigns with you
in the unity of the Holy Spirit,
one God, for ever and ever.
Amen.
BISHOPS AND CONFESSORS, APOSTLES TO THE SLAVS
These brothers, the Apostles of the Slavs, were born in Thessalonica, in 827 and 826 respectively. Though belonging to a senatorial family they renounced secular honours and became priests. They were living in a monastery on the Bosphorous, when the Khazars sent to Constantinople for a Christian teacher. Cyril was selected and was accompanied by his brother. They learned the Khazar language and converted many of the people. Soon after the Khazar mission there was a request from the Moravians for a preacher of the Gospel. German missionaries had already laboured among them, but without success. The Moravians wished a teacher who could instruct them and conduct Divine service in the Slavonic tongue. On account of their acquaintance with the language, Cyril and Methodius were chosen for their work. In preparation for it Cyril invented an alphabet and, with the help of Methodius, translated the Gospels and the necessary liturgical books into Slavonic. They went to Moravia in 863, and laboured for four and a half years. Despite their success, they were regarded by the Germans with distrust, first because they had come from Constantinople where schism was rife, and again because they held the Church services in the Slavonic language. On this account the brothers were summoned to Rome by Nicholas I, who died, however, before their arrival. His successor, Adrian II, received them kindly. Convinced of their orthodoxy, he commended their missionary activity, sanctioned the Slavonic Liturgy, and ordained Cyril and Methodius bishops. Cyril, however, was not to return to Moravia. He died in Rome, 4 Feb., 869.
At the request of the Moravian princes, Rastislav and Svatopluk, and the Slav Prince Kocel of Pannonia, Adrian II formed an Archdiocese of Moravia and Pannonia, made it independent of the German Church, and appointed Methodius archbishop. In 870 King Louis and the German bishops summoned Methodius to a synod at Ratisbon. Here he was deposed and condemned to prison. After three years he was liberated at the command of Pope John VIII and reinstated as Archbishop of Moravia. He zealously endeavoured to spread the Faith among the Bohemians, and also among the Poles in Northern Moravia. Soon, however, he was summoned to Rome again in consequence of the allegations of the German priest Wiching, who impugned his orthodoxy, and objected to the use of Slavonic in the liturgy. But John VIII, after an inquiry, sanctioned the Slavonic Liturgy, decreeing, however, that in the Mass the Gospel should be read first in Latin and then in Slavonic. Wiching, in the meantime, had been nominated one of the suffragan bishops of Methodius. He continued to oppose his  metropolitan, going so far as to produce spurious papal letters. The pope, however, assured Methodius that they were false. Methodius went to Constantinople about this time, and with the assistance of several priests, he completed the translation of the Holy Scriptures, with the exception of the Books of Machabees. He translated also the "Nomocanon", i.e. the Greek ecclesiastico-civil law. The enemies of Methodius did not cease to antagonize him. His health was worn out from the long struggle, and he died 6 April, 885, recommending as his successor Gorazd, a Moravian Slav who had been his disciple.
Formerly the feast of Saints Cyril and Methodius was celebrated in Bohemia and Moravia on 9 March; but Pius IX changed the date to 5 July. Leo XIII, by his Encyclical "Grande Munus" of 30 September, 1880, extended the feast to the universal Church.
(Taken from Catholic Encyclopedia)