Saint February 25 : Saint Toribio Romo González a Martyr Priest - Patron of Immigrants who said "Lord...grant me this favor: do not leave me a day of my life without saying Mass..." 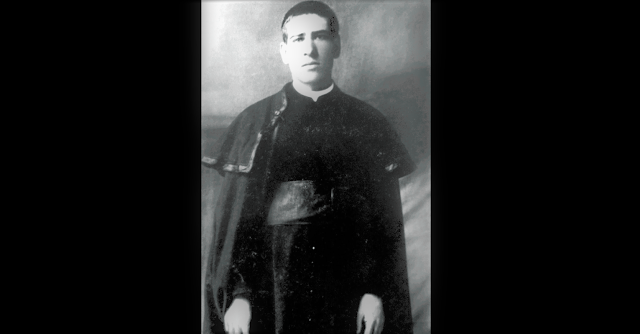 
One of the currently best known Mexican saints in the country and also in the United States. He is popularly known as the Patron of the Wet.
Father Toribio Romo González is one of the currently best-known Mexican saints in the country and also in the United States. He is popularly known as the Patron Saint of the Wet, that is, of the Mexican workers who spend time in the United States in search of family support. Many of them today entrust themselves to his protection and are not disappointed.
Some weekends, the town of Santa Ana Guadalupe, which has 300 inhabitants, in the region of Los Altos de Jalisco, contemplates the arrival of more than 50 buses full of pilgrims from various parts of the country, who go to pray before the tomb of Saint Toribio Romo, to ask him for favors or also to thank him for his protection during a difficult time while they were working as day laborers in the neighboring northern country. At the entrance to the town stands a monumental arch made of pink stone, erected in 2000, the year of his canonization, by a group of grateful Zacatecas braceros who recognize him as their protector.
Some unique cases are counted. Among them, that of Mr. Jesús Buendía, a 45-year-old peasant from Zacatecas, who in the 1980s decided to move to California as an undocumented person in search of employment on an agricultural plantation. A “pollero” in Mexicali made him cross the border, but they were discovered by the surveillance patrol and that man abandoned him to his fate. Buendía went into the desert to escape from the guard.
After walking for several days through desolate paths, and fainting from heat and thirst, he saw a truck approaching. A thin young man with white skin and blue eyes got out of it, who in perfect Spanish offered him water and food. He told her not to worry because he would tell her where they requested pawns. He also left her a few dollars as help.
By way of farewell, that good Samaritan from the desert told him:
- When you have money and work, if you return to Mexico look for me in Jalostotitlán, Jalisco. Ask for Toribio Romo.
After a few years in California, Jesús Buendía returned to Mexico and wanted to thank Toribio for his important help on that dramatic occasion. He went to Jalostotitlán and from there they sent him to Santa Ana Guadalupe, about 10 kilometers from the town.
“There I asked for Toribio Romo and they told me that he was in the temple. I almost had a heart attack when I saw the photograph of my friend and protector on the main altar. I learned that it was the priest Toribio Romo, killed during the Cristero War. Since then I entrust myself to him every time I go to the United States to work.”