Wow Man Yells at Pope Francis During Audience "This is not the Church that God wanted..." but the Pope Prays for Him - VIDEO 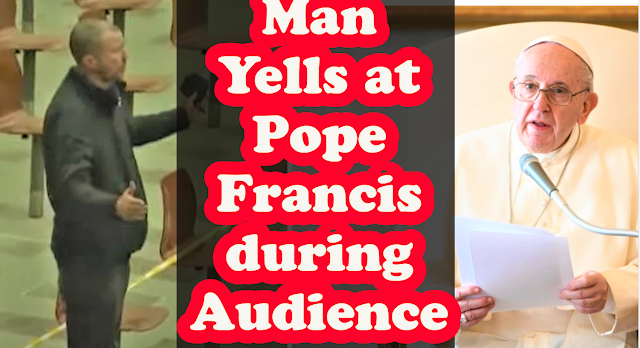 During Pope Francis' General Audience, on Wednesday, February 2nd, 2022, with hundreds of people in Paul VI Hall at the Vatican a man began to yell at the Pope.

"This is not the Church that God wanted"  "The church is one, holy, catholic and apostolic…You’re not a king.” He shouted before being dragged away by the Vatican security.

A few minutes ago, we heard a person shouting, shouting, who had some kind of problem, I don't know if it was physical, psychological, spiritual: but it’s one of our brothers in trouble. I would like to end by praying for him, our brother who is suffering, poor thing: if he was shouting it is because he is suffering, he has some need. Let us not be deaf to this brother's need. Let us pray together to Our Lady for him: Hail Mary…

Anonymous said…
It's hard to understand that since man existed or
created or discovered he had a conscience and soul
he starts discriminating other. This is so to him as
he fears or has fears of being judged. When caught
in wrong doing he designated 'another-not me'. Adam
pointed his finger to Eve, and Eve pointed her finger
to Satan near the culprit fruit tree!! Thus man is not
happy with himself then.

Improvements or changes in habits have never been easier.