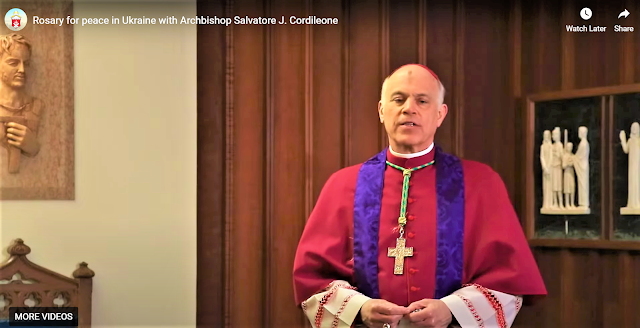 San Francisco Archbishop’s ‘Rosary for Peace in Ukraine’ knocked offline in apparent hack
March 2, 2022 // Archbishop
SAN FRANCISCO, March 2 _ The Archdiocese of San Francisco today reported to the FBI an apparent cyberattack during an online “Rosary for Peace in Ukraine” led by Archbishop Salvatore J. Cordileone.
SEE 6:15 Mark on Video Below:
(For those who would like to pray with the Archbishop, the YouTube video for the rosary is at the bottom of this post)
Archbishop Cordileone’s rosary for peace followed the lead of Pope Francis who called for prayer and fasting for peace in Ukraine on Ash Wednesday.
An unprecedented number of requests to access the website temporarily knocked the website off line during the rosary.
“The evidence strongly suggests it was a cyberattack,” said Father Patrick Summerhays, vicar general and moderator of the curia. “The rosary page was definitely the cause of the outage.”
The pattern of this sudden surge in traffic is consistent with a method of cyber attacking called Distributed Denial of Service Attack. The source of the attack could not be immediately identified by the website hosting company.
The Archdiocese began publicizing the event Sunday evening on social media and in emails to supporters.
Source: https://www.sfarchdiocese.org/sf-archbishops-rosary-for-peace-in-ukraine-knocked-offline-in-apparent-hack/