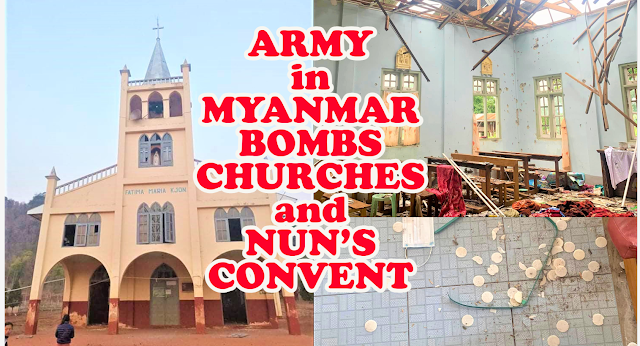 On the morning of March 10th, 2022, the Burmese military junta struck a building, convent and hospital of the Sisters of Reparation. A church was also attacked two days ago. The government of national unity is asking the West for stricter sanctions. The UN has noted that there are now over 800,000 internally displaced people and many houses burnt down due to the conflict in Myanmar. This civil conflict has been going on for over a year.
A Catholic church and convent have suffered serious damage after being bombed.
See 2:57 Mark on Video Below:
On 8 March, the Burmese military junta, which overthrew the government led by Aung San Suu Kyi on February 1st, 2021, carried out an airstrike on the Church of Our Lady of Fatima in the village of Saun Du La, damaging the ceiling and windows.
So far, 16 parishes have been forcefully displaced and 6 churches have been deliberately attacked and destroyed.
The army bombed the convent of the Sisters of Reparation, that was used as a rest home and hospital by the elderly sisters in the village of Doungankha. The church next to the convent had been bombed on the 6th of June 2021.
Both buildings are located near the town of Demoso, in a region with a Christian majority where the anti-Golpe militia of the People's Defence Forces are fighting against the troops of the Tatmadaw, the Burmese army.
"There was no armed conflict going on in that area. It was a planned attack against the church and innocent civilians," said one priest.
In the diocese of Loikaw, in eastern Kayah State, the military junta hit at least eight churches in air strikes, ignoring the bishops' appeals to spare civilians seeking shelter in places of worship. At least 16 out of 38 parishes were bombed, forcing nuns and priests to flee.
Here's a list of the Catholic Churches they've targeted so far in their artillerly shelling, raiding-looting and aerial bombing.
(Loikaw Diocese, 2021-2022)
1. Sacred Heart of Jesus, Kayan Tharyar
2. Mary Queen of Peace, Daw Ngan Kha
3. St. Joseph, Demoso
4. Our Lady of Lourdes, 6 Mile
5. Immaculate Conception of Mary, Hpruso
6. Christ the King Cathedral, Loikaw, (raiding and looting)
7. Sacred Heart of Jesus, Daw Oo Khu (13.01.2022)
8. Our Lady of Fatima, Saung Du Lar (08.03.2022)
(Phekon Diocese, 2021)
9. Sacred Heart of Jesus Cathedral, Phekon
Sources: https://news.un.org/en/story/2022/02/1111812
https://www.asianews.it/news-en/Church-and-convent-bombed-in-Demoso-55324.html
https://www.facebook.com/wilbertmireh with photos and news credit: Sar Kar Ree

Serge Chan Kam Tak said…
The peaceful catholics are since Christ advent in this world have been always considered as the ennemies of others. Why so? And for how long in the future. Wish them all those others to join in with Christ, the true God and Truth. Stop that usual persecutions of good and peaceful children of the only Almighty God.
March 11, 2022 at 12:02 PM