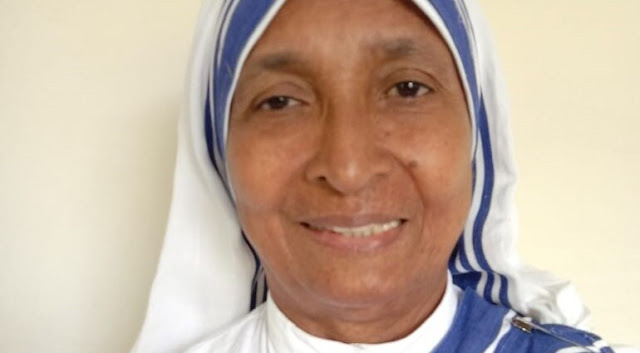 Sister M. Joseph Michael, a native of southern India’s Kerala state, is the new superior of the Missionaries of Charity, that was founded by St. Mother Teresa. Elected by the general chapter in Calcutta, she takes the place of Sr. Mary Prema Pierick, who had led the sisters since 2009. Brought up in Calcutta alongside Mother Teresa, 68 years old, she was currently superior for Kerala.
She was elected by the general chapter of the religious who met in the mother house in Calcutta and takes the place of Sr. Prema, the German-born nun who led the Missionaries of Charity for two mandates from 2009 to today.
SEE 1:27 Mark on Video Below:
Sr. Joseph becomes the fourth nun called to lead the sisters in the white and blue sari, known throughout the world for their presence next to the poorest. After St. Teresa of Calcutta, foundress of the Missionaries of Charity who died in 1997, the congregation was led by the Nepalese Sr. Nirmala Joshi, who also founded the contemplative branch of the sisters.
Sr. Joseph thus became the first Indian to hold the office of superior general. She is the daughter of Devasi and Kochuthresya of Poyyapara near Mala Thrissur, in Thrissur District.  She joined the Missionaries of Charity at the age of 20 after passing from Poya AKM School and was one of Mother Teresa's closest collaborators. She also served in the Philippines, Poland and Papua New Guinea.
She was currently living at the Shishu Bhavan (children's home) in Ernakulam, where she was superior of the Missionaries of Charity for Kerala. Previously, until 15 months ago, she was the Assistant General beside Sr. Prema. Speaking from Ernakulam, Sr John Mariette commented to AsiaNews on her election: "I am sure that God will use all her talents and qualities to bring good to society according to His plans". The chapter of the Missionaries of Charity - which also elected the general council that will flank Sr Joseph - was attended by representatives of all the communities of the order, now present in 110 countries around the world.
Sources: https://www.vaticannews.va/en/church/news/2022-03/missionaries-charity-sister-new-superior-general-joseph-india.html
https://www.asianews.it/news-en/Sr.-Joseph-the-new-superior-of-the-Missionaries-of-Charity-55349.html