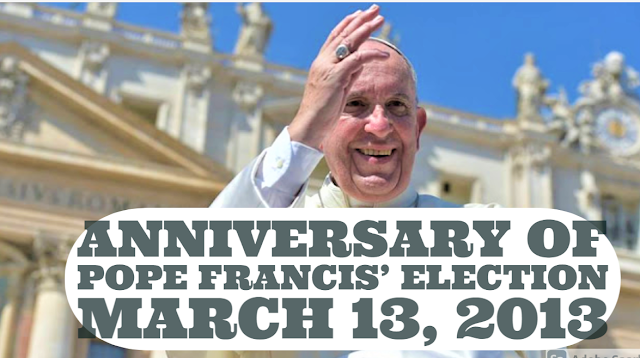 Jorge Bergoglio became the 266th Pope on March 13, 2013. His first words as pontiff: “buona sera.” He was born on December 17, 1936 (age 85 years), in Flores, Buenos Aires, Argentina. His focus is on the call for mercy and pastoral outreach towards the poor and towards the most vulnerable are unique traits of his ministry. Watch our video from the early moments of his election and receive his 1st Blessing as Pope:
Historic moments of his Pontificate include the trip to the Iraq, embrace with the Russian Orthodox Patriarch Kirill in Cuba, his silent prayer in Auschwitz, the canonization of Mother Teresa, his ecumenical journey to Lund to mark the 500th anniversary of the Reformation, the publishing of his  Encyclical Letter “Fratelli Tutti”, and more. His motto is "Miserando atque eligendo" - Lowly but chosen. Pope Francis accepted his role as Sovereign head of the Roman Catholic Church. It was declared Habemus Papam, meaning we have a Pope. White smoke from the Vatican indicated that a new Pope was chosen after the conclave of Cardinals.
The pope has completed 35 apostolic trips during his pontificate, and hopes to visit Congo and South Sudan. Francis is the first Jesuit pope, the first from the Americas, the first from the Southern Hemisphere. He was  created a cardinal in 2001 by Pope John Paul II. Pope Francis' Papal inauguration was on the Feast of Saint Joseph, March 19, 2013.
PRAYER for the POPE: O God, shepherd and ruler of all the faithful, look favorably on your servant Francis, whom you have set at the head of your Church as her shepherd; Grant, we pray, that by word and example he may be of service to those over whom he presides so that, together with the flock entrusted to his care, he may come to everlasting life. Through our Lord Jesus Christ, your Son, who lives and reigns with you in the unity of the Holy Spirit, one God, for ever and ever. Amen. (Prayer Source: USCCB)