Head of the Catholic Church in Ukraine says "a real genocide is taking place..." in Mariupol, Ukraine 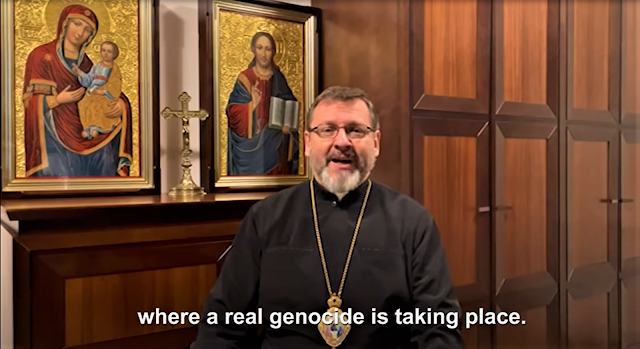 Head of the UGCC: "A real genocide is taking place in Mariupol"

We especially sympathize with the city of Mariupol, where the real genocide is taking place. People die not only from weapons, but also from the hatred of the enemy. Hundreds of people are dying of hunger in and around the city. His Beatitude Sviatoslav, Father and Head of the Ukrainian Greek Catholic Church, said this in his daily military address on the 26th day of the Russian war against Ukraine.

The head of the Church noted that, thank God, we survived this night.

The Lord God allowed us to see the light of day. But this night in Ukraine blood was shed again, our cities and villages were shaking again from the bombings. Again cries, howls and cries are heard from the Ukrainian land to the heavens, to the ears of God.

"In the temporarily occupied territories," says the Primate, "real crimes against humanity are being committed." We receive daily news about humanitarian catastrophes, murders, looting, rape. But even there, in the south of Ukraine, peaceful people are protesting against the occupying power - people are protesting against rapists and murderers. People show that Kherson and other occupied cities are Ukraine. They want to live in an independent Ukrainian free state. "

His Beatitude Sviatoslav asks all of us to pray especially for the people who are forcibly deported to Russia, because “again we have the facts of deportation of Ukrainian citizens to another country. None of us knows what fate awaits them there, because they do not decide for themselves what to do. "

He thanked all those who are called rescuers in Ukraine for their dedicated work. "These are our firefighters, as well as emergency services at various levels. This is the kind of courage and faith you need in the service you do if the infrastructure of our cities and villages is bombed and destroyed every day, and these tireless heroes tirelessly and stubbornly restore it every day, ”he said.

It is important, according to the Head of the Church, that the whole world, the whole world community be like those rescuers who, despite the war, regain the space of life, who build peace and save the lives of people in modern Ukraine, which is struggling.