Orthodox Pope and Patriarch Theodore of Alexandria says "We condemn Russia's aggression and ask God for our Ukrainian brothers and sisters to protect and achieve peace." 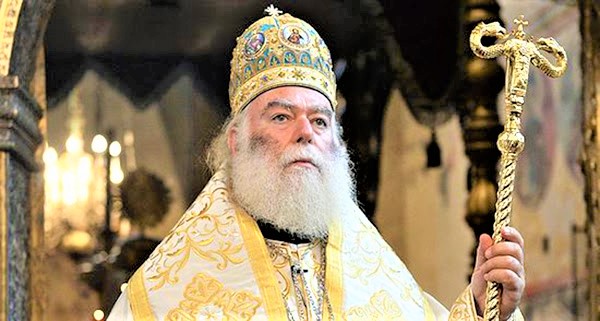 His Beatitude Theodore II, Patriarch of Alexandria and All Africa, expressed his deepest condolences on the suffering of the Ukrainian people from Russian military aggression.

He also noted the heroism of soldiers and all Ukrainians who defend their state and freedom from invaders. This was stated by the Primate of the Second Church of Alexandria in a telephone conversation with His Beatitude Metropolitan Epiphanius of Kyiv and All Ukraine.

“Our ancient Apostolic Church, the throne of St. Mark, like the whole world, deeply sympathizes with Ukraine, your pious people, whom I know and love since my ministry in Odessa. We condemn Russia's aggression and ask God for our Ukrainian brothers and sisters to protect and achieve peace. Tears well up in our eyes when we see the aggressors firing rockets at civilians and their homes. Pass on to your flock our assurance of love and prayer for Ukraine, for peace on your land "- said in particular His Beatitude Patriarch Theodore.

Metropolitan Epiphanius thanked the Primate of the Patriarchate of Alexandria and in his person - the whole Church for support, compassion and prayer. "The truth is on our side, so God is with us. And where there is God, there is victory, ”said the head of the PCU.

Earlier, His Beatitude Metropolitan Epiphanius also had a telephone conversation with His Holiness Ecumenical Patriarch Bartholomew, from whom he also received assurances of prayer, support and hope for peace. The Ecumenical Patriarch has also made a number of public appeals regarding Russia's aggression against Ukraine.

In addition, during the previous days, the Primate of the PCU had talks with the President of Ukraine Volodymyr Zelensky, a number of Ukrainian statesmen, as well as foreign friends of Ukraine. The Primate had telephone conversations with Metropolitans Andriy of Halychyna, Joasaph of Ivano-Frankivsk and Halychyna, Mykhailo of Lutsk and Volyn, Serhiy of Donetsk and Mariupol, Archbishops of Chernihiv and Nizhyn Yevstratiy, Kropyvny and Kryvyi Rih, Bohdan and Kryvyi Rih Kamyanets-Podilsky Paul and many other bishops of the PCU.

The day before, in his video address , the Primate thanked the defenders of Ukraine and called on them for God's blessing.