Pope Francis Met with the President of the Republic of Burundi, Évariste Ndayishimiye, who Gifted the Pope Musical Instruments from the Country 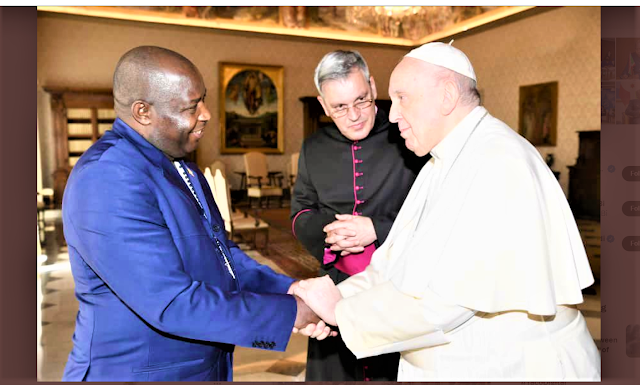 During the cordial discussions in the Secretariat of State, satisfaction was expressed for the good relations between the Holy See and Burundi, and for the contribution of the Catholic Church to the life of the country in various sectors of society.

During the conversation, the political and social situation of the country was discussed, and themes of a regional nature were addressed.
During the customary exchange of gifts, Pope Francis gave the President an "Angel of Peace" bronze medallion and copies of the papal documents: "Message for the World Peace Day 2022," "Human Fraternity for World Peace and Living Together," and the Vatican Publishing House book featuring the "Statio Orbis of 27 March 2020." President Ndayishimiye gave Pope Francis traditional musical instruments of Burundi, and a certificate confirming contributions towards the building of a Church in Burundi. Edited from Vatican News - Picture Screenshot from Twitter - https://press.vatican.va/content/salastampa/it/bollettino/pubblico/2022/03/26/0217/00459.html