Pope Francis says "The example of these saints highlights some of the elements that make up that femininity so necessary to the Church..." to Conference on Women Doctors 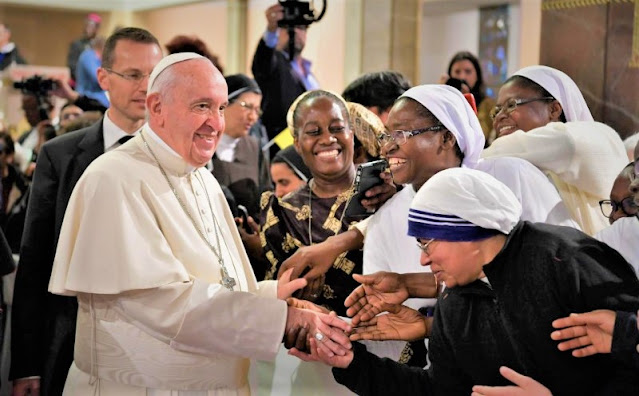 I cordially greet the organizers and participants in the International Academic Conference marking the anniversaries of the declarations of Teresa of Ávila, Catherine of Siena, Thérèse of Lisieux and Hildegard of Bingen as Doctors of the Church, as well as the naming of Saints Bridget of Sweden, Teresa Benedicta of the Cross and Catherine of Siena as Co-Patronesses of Europe by Saint John Paul II (cf. Spes Aedificandi, n. 3).

The preeminent teachings of these saints, for which they were declared Doctors or Patronesses of the Church, are particularly timely due to their enduring depth and relevance and, in the present circumstances, can offer light and hope to our fragmented and fractious world.  Although they belong to different times and places and carried out very different missions, they all offered the witness of a holy life.  Through the grace of baptism, they were docile to the Spirit and pursued their own journey of faith, moved not by shifting ideologies but an unwavering adherence to the “humanity of Christ” that permeated their lives.  At times, they too felt incapable and limited, “little women”, as Teresa of Ávila would say, faced with an undertaking that surpassed them.  From where, then, did they draw the strength to carry on, if not from the love of God that filled their hearts?  Like Thérèse of Lisieux, they were able to fully realize their vocation, their “little way”, their life project, a path accessible to all: that of holiness in daily life.

Our world today recognized that the dignity and intrinsic worth with which the Creator endowed them be restored to all women.  The example of these saints highlights some of the elements that make up that femininity so necessary to the Church and to the world: the courage to face difficulties; the capacity for being practical; a natural desire to promote what is most beautiful and human according to God’s plan; and a far-sighted, prophetic vision of the world and of history, that made them sowers of hope and builders of the future.

Their dedication to the service of humanity was accompanied by a great love for the Church and for the “Sweet Christ on Earth”, as Catherine of Siena liked to call the Pope.  They felt co-responsible for remedying the sins and sufferings of their time, and contributed peacefully to the mission of evangelization in full ecclesial communion.

May the fruits of your meeting be an incentive to promote that “feminine holiness” which makes the Church and the world so fruitful.  With these sentiments, I entrust you to the intercession of the Virgin Mary, Mother of the Church, and I cordially impart my blessing.  And I ask you, please, to remember to pray for me.