Pope Francis says "In your ministry let yourselves be guided by the meek and concrete example of Saint Joseph...lavishing himself for Jesus and Mary, made his life the "sign" of a higher fatherhood..." 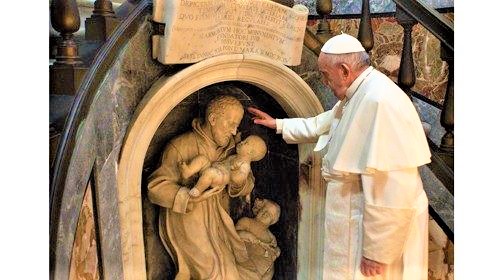 To the Rev. Father Tullio Locatelli
Father General of the Congregation of San Giuseppe

On the occasion of the 150th anniversary of the foundation of your Institute, I wish to extend my affectionate greeting to you and to the Brothers. I rejoice with you for this significant milestone, which marks the beginning of a Jubilee Year, in remembrance of the journey made by your religious family, founded in Turin by Saint Leonard Murialdo on March 19, 1873. It is like going back to the sources to draw new energy from them. for the future; but it is also an opportunity to remember the Lord gratefully and ask him with confidence that he continue to bless the Congregation, sustaining its charism, aimed at the education of the young, and conforming it to today according to the will of the Spirit.

«In new times new works are needed», said Saint Leonardo Murialdo. He knew how to read the era in which he lived, grasp the problems present in Turin in the second half of the nineteenth century, offer effective remedies, in step with the times. He took poor and abandoned youth to heart, helping many young people not only to face immediate needs, but to prepare for a dignified future through education and learning a profession. His far-sightedness also characterized his commitment to another social emergency, that linked to the world of workers. His activity in this area too was really intense, yet he always remained simple and confident, supported by the mild strength of God's love: "We are in God's hands - he used to say - and we are in good hands".

Unforeseen scenarios opened up to which he was able to respond with enthusiasm and renewed works. He did so by letting himself be guided by an ancient and ever-present wisdom, that of St. Joseph. Inspired by him, he busied himself in humility and charity, exhorting every Congregate to be a friend, brother and father of young people in need, drawing strength from the conviction that God loves each one with a tender, provident and merciful predilection.

In these one hundred and fifty years of life your Congregation has been generous in the mission. Today it is present in Europe, America, Asia and Africa, and operates in various areas, ranging from parish care to welcoming children, to the management of family homes and oratories. A large and demanding field of work in which many new ones have been added to ancient challenges.

In this Jubilee Year I wish you to deepen, at the school of the Founder, the art of grasping the needs of the times and of providing for them with the creativity of the Holy Spirit. I recommend to you in particular the younger ones, who, today more than ever, need credible witnesses. In your ministry let yourselves be guided by the meek and concrete example of Saint Joseph; like him you never stop dreaming of the amazing wonders of God; like him who, lavishing himself for Jesus and Mary, made his life the "sign" of a higher fatherhood, that of the heavenly Father (cf. Apostolic Letter  Patris corde , 7), you welcome the great call to be dedicated fathers to the youth of today.

With these sentiments, I impart my Blessing to all of you, asking you to pray for me.