Saint March 10 : Forty Martyrs of Sebaste - Persecuted Christians of the East - Martyrs who Died in 320 AD 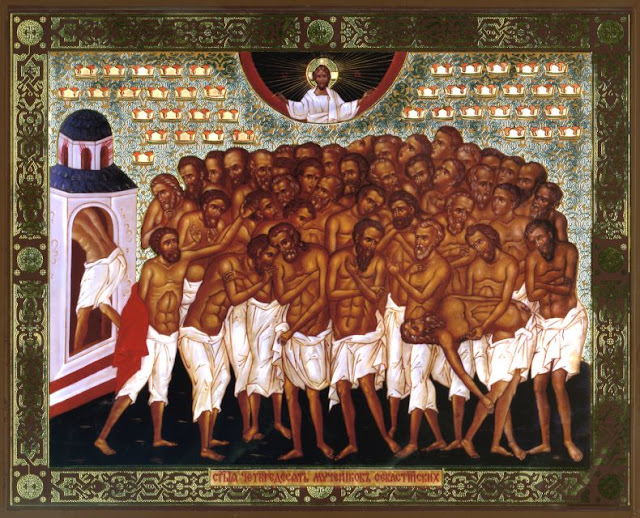 Feast Day:
March 10
Died:
320 AD, Sebaste
MARTYRS
A party of soldiers who suffered a cruel death for their faith, near Sebaste, in Lesser Armenia, victims of the persecutions of Licinius, who, after the year 316, persecuted the Christians of the East. The earliest account of their martyrdom is given by St. Basil, Bishop of Caesarea (370-379), in a homily delivered on the feast of the Forty Martyrs (Hom. xix in P.G., XXXI, 507 sqq.). The feast is consequently more ancient than the episcopate of Basil, whose eulogy on them was pronounced only fifty or sixty years after martyrdom, which is thus historic beyond a doubt. According to St. Basil, forty soldiers who had openly confessed themselves Christians were condemned by the prefect to be exposed naked upon a frozen pond near Sebaste on a bitterly cold night, that they might freeze to death.

Among the confessors, one yielded and, leaving his companions, sought the warm baths near the lake which had been prepared for any who might prove inconstant. One of the guards set to keep watch over the martyrs beheld at this moment a supernatural brilliancy overshadowing them and at once proclaimed himself a Christian, threw off his garments, and placed himself beside the thirty-nine soldiers of Christ. Thus the number of forty remained complete. At daybreak, the stiffened bodies of the confessors, which still showed signs of life, were burned and the ashes cast into a river. The Christians, however, collected the precious remains, and the relics were distributed throughout many cities; in this way the veneration paid to the Forty Martyrs became widespread, and numerous churches were erected in their honour.

One of them was built at Caesarea, in Cappadocia, and it was in this church that St. Basil publicly delivered his homily. St. Gregory of Nyssa was a special client of these holy martyrs. Two discourses in praise of them, preached by him in the church dedicated to them, are still preserved (P. G., XLVI, 749 sqq., 773 sqq.) and upon the death of his parents, he laid them to rest beside the relics of the confessors. St. Ephraem, the Syrian, has also eulogized the forty Martyrs (Hymni in SS. 40 martyres). Sozomen, who was an eye-witness, has left us (Hist. Eccl., IX, 2) an interesting account of the finding of the relics in Constantinople through the instrumentality of the Empress Pulcheria. Special devotion to the forty martyrs of Sebaste was introduced at an early date into the West. St. Gaudentius, Bishop of Brescia in the beginning of the fifth century (d. about 410 or 427), received particles of the ashes of martyrs during a voyage in the East, and placed them with other relics in the altar of the basilica which he had erected, at the consecration of which he delivered a discourse, still extant (P. L., XX, 959 sqq.) Near the Church of Santa Maria Antiqua, in the Roman Forum, built in the fifth century, a chapel was found, built, like the church itself, on an ancient site, and consecrated to the Forty Martyrs. A picture, still preserved there, dating from the sixth or seventh century, depicts the scene of the martyrdom. The names of the confessors, as we find them also in later sources, were formerly inscribed on this fresco. Acts of these martyrs, written subsequently, in Greek, Syriac and Latin, are yet extant, also a "Testament" of the Forty Martyrs. Their feast is celebrated in the Greek, as well as in the Latin Church, on 9 March.
(Taken from Catholic Encyclopedia)