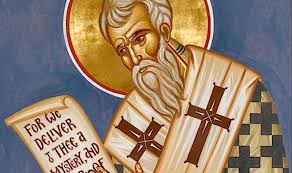 Born:
315
Died:386
BISHOP OF JERUSALEM, DOCTOR OF THE CHURCH
born about 315; died probably 18 March, 386. In the East his feast is observed on the 18th of March, in the West on the 18th or 20th. Little is known of his life. We gather information concerning him from his younger contemporaries, Epiphanius, Jerome, and Rufinus, as well as from the fifth-century historians, Socrates, Sozomen and Theodoret. Cyril himself gives us the date of his "Catecheses" as fully seventy years after the Emperor Probus, that is about 347, if he is exact. Constans (d. 350) was then still alive. Mader thinks Cyril was already bishop, but it is usually held that he was at this date only as a priest. St. Jerome relates (Chron. ad ann. 352) that Cyril had been ordained priest by St. Maximus, his predecessor, after whose death the episcopate was promised to Cyril by the metropolitan, Acacius of Caesarea, and the other Arian bishops, on condition that he should repudiate the ordination he had received from Maximus. He consented to minister as deacon only, and was rewarded for this impiety with the see. Maximus had consecrated Heraclius to succeed himself, but Cyril, by various frauds, degraded Heraclius to the priesthood. So says St. Jerome; but Socrates relates that Acacius drove out St. Maximus and substituted St. Cyril. A quarrel soon broke out between Cyril and Acacius, apparently on a question of precedence or jurisdiction. At Nicaea the metropolitan rights of Caesarea had been guarded, while a special dignity had been granted to Jerusalem. Yet St. Maximus had held a synod and had ordained bishops. This may have been as much as the cause of Acacius' enmity to him as his attachment to the Nicene formula. On the other hand, Cyril's correct Christology may have been the real though veiled ground of the hostility of Acacius to him. At all events, in 357 Acacius caused Cyril to be exiled on the charge of selling church furniture during a famine. Cyril took refuge with Silvanus, Bishop of Taraus. He appeared at the Council of Seleucia in 359, in which the Semi-Arian party was triumphant. Acacius was deposed and St. Cyril seems to have returned to his see. But the emperor was displeased at the turn of events, and, in 360, Cyril and other moderates were again driven out, and only returned at the accession of Julian in 361. In 367 a decree of Valens banished all the bishops who had been restored by Julian, and Cyril remained in exile until the death of the persecutor in 378. In 380, St. Gregory of Nyssa came to Jerusalem on the recommendation of a council held at Antioch in the preceding year. He found the Faith in accord with the truth, but the city a prey to parties and corrupt in morals. St. Cyril attended the great Council of Constantinople in 381, at which Theodosius had ordered the Nicene faith, now a law of the empire, to be promulgated. St. Cyril then formally accepted the homoousion; Socrates and Sozomen call this an act of repentance. Socrates gives 385 for St. Cyril's death, but St. Jerome tells us that St. Cyril lived eight years under Theodosius, that is, from January 379.Source The Catholic Encyclopedia