Saint March 24 : St. Catherine of Sweden who Lived in Chastity with her Husband and the Pro-Life Patron Against Abortion, Miscarriage 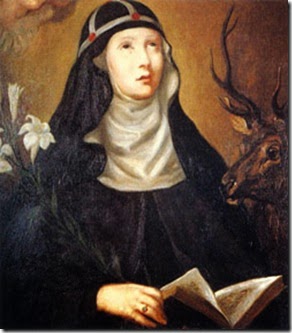 (Prayer at Bottom)
Born:
1331 at Sweden
Died:
24 March 1381
Canonized:
1484 (cultus confirmed) by Pope Innocent VIII
Patron of:
against abortion, against miscarriages
The fourth child of St. Bridget and her husband, Ulf Gudmarsson, born 1331 or 1332; died 24 March, 1381. At the time of her death St. Catherine was head of the convent of Wadstena, founded by her mother; hence the name, Catherine Vastanensis, by which she is occasionally called. At the age of  seven she was sent to the abbess of the convent of Riseberg to be educated and soon showed, like her mother, a desire for a life of self-mortification and devotion to spiritual things.
At the command of her father, when about thirteen or fourteen years, she married a noble of German descent, Eggart von Kürnen. She at once persuaded her husband, who was a very religious man, to join her in a vow of chastity. Both lived in a state of virginity and devoted themselves to the exercise of Christian perfection and active charity. In spite of her deep love for her husband, Catherine accompanied her mother to Rome, where St. Bridget went in 1349. Soon after her arrival in that city Catherine received news of the death of her husband in Sweden. She now lived constantly with her mother, took an active part in St. Bridget's fruitful labours, and zealously imitated her mother's ascetic life. Although the distinguished and beautiful young widow was surrounded by suitors, she steadily refused all offers of marriage. In 1372 St. Catherine and her brother, Birger, accompanied their mother on a pilgrimage to the Holy Land; after their return to Rome St. Catherine was with her mother in the latter's last illness and death.
In 1374, in obedience to St. Bridget's wish, Catherine brought back her mother's body to Sweden for burial at Wadstena, of which foundation she now became the head. It was the motherhouse of the Brigittine Order, also called the Order of St. Saviour. Catherine managed the convent with great skill and made the life there one in harmony with the principles laid down by its founder. The following hear she went again to Rome in order to promote the canonization of St. Bridget, and to obtain a new papal confirmation of the order. She secured another confirmation both from Gregory XI (1377) and from Urban VI (1379) but was unable to gain at the time the canonization of her mother, as the confusion caused by the Schism delayed the process. When this sorrowful division appeared she showed herself, like St. Catherine of Siena, a steadfast adherent of the part of the Roman Pope, Urban VI, in whose favour she testified before a judicial commission. Catherine stayed five years in Italy and then returned home, bearing a special letter of commendation from the pope. Not long after her arrival in Sweden she was taken ill and died. In 1484 Innocent VIII gave permission for her veneration as a saint and her feast was assigned to 22 March in the Roman martyrology. Catherine wrote a devotional work entitled "Consolation of the Soul" (Sielinna Troëst), largely composed of citations from the Scriptures and from early religious books; no copy is known to exist. Generally she is represented with a hind at her side, which is said to have come to her aid when unchaste youths sought to ensnare her.


Prayer for Avoiding Miscarriages or Abortion
Dear Saint Catherine, you know the temptations of mothers today as well as the dangers that await unborn infants. Intercede for us that miscarriage may be avoided and a healthy baby may be brought forth; who will become a true child of God.
Also pray for all mothers, that they may not resort to abortion but will bring new life into our world. Dear Heavenly Father, I thank and praise You for the gift of all human life.
I am most grateful for new life in the womb – the unborn child forming.
Through the prayers of Mary, Mother of Jesus, and the intercession of Saint Catherine of Sweden, I beg You to watch over and protect little ones inside the womb.
In Jesus’ Name. Amen.