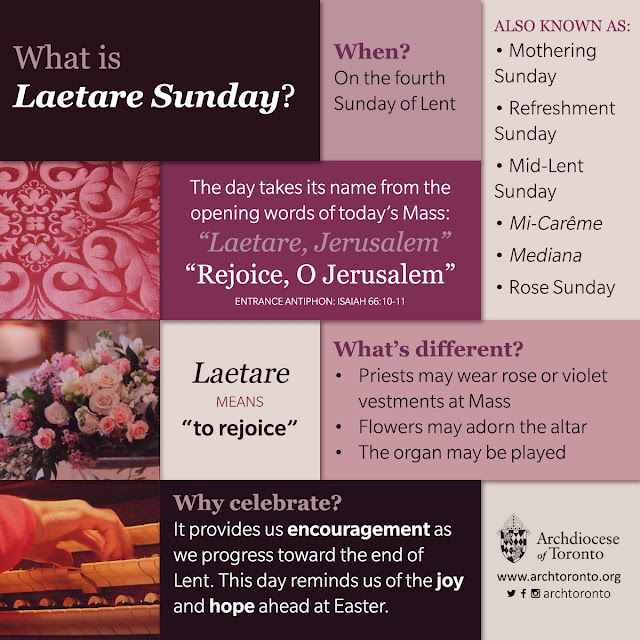 1. The fourth, or middle, Sunday of Lent, so called from the first words of the Introit at Mass, "Laetare Jerusalem" — "Rejoice, O Jerusalem". During the first six or seven centuries the season of Lent commenced on the Sunday following Quinquagesima, and thus comprised only thirty-six fasting days. To these were afterwards added the four days preceding the first Sunday, in order to make up the forty days' fast, and one of the earliest liturgical notices of these extra days occurs in the special Gospels assigned to them in a Toulon manuscript of 714.
2. Strictly speaking, the Thursday before Laetare Sunday is the middle day of Lent, and it was at one time observed as such, but afterwards the special signs of joy permitted on this day, intended to encourage the faithful in their course through the season of penance, were transferred to the Sunday following.
3.They consist of (like those of Gaudete Sunday in Advent) in the use of flowers on the altar, and of the organ at Mass and Vespers; rose-coloured vestments also allowed instead of purple, and the deacon and subdeacon wear dalmatics, instead of folded chasubles as on the other Sundays of Lent.
4. The contrast between Laetare and the other Sundays is thus emphasized, and is emblematical of the joys of this life, restrained rejoicing mingled with a certain amount of sadness.
5. The station at Rome was on this day made at the church of S. Croce in Gerusalemme, one of the seven chief basilicas; the Golden Rose, sent by the popes to Catholic sovereigns, used to be blessed at this time, and for this reason the day was sometimes called "Dominica de Rosa".
Other names applied to it were Refreshment Sunday, or the Sunday of the Five Loaves, from a miracle recorded in the Gospel; Mid-Lent, mi-carême, or mediana; and Mothering Sunday, in allusion to the Epistle, which indicates our right to be called the sons of God as the source of all our joy, and also because formerly the faithful used to make their offerings in the cathedral or mother-church on this day. This latter name is still kept up in some remote parts of England, though the reason for it has ceased to exist.
Text Source: The Catholic Encyclopedia - Image the Archdiocese of Toronto