During Papal Flight to Malta, Pope Francis Voices Possibility of Traveling to Ukraine 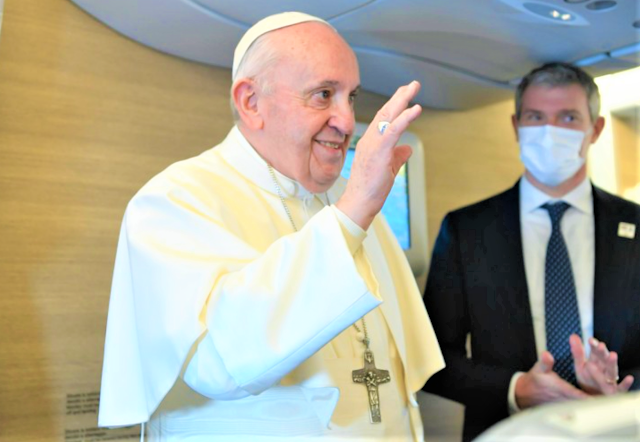 Pope Francis, on the flight to Malta, spoke with journalists on the plane. Vatican News reports, that one correspondent asked about the possibility of the Pope traveling to Kyiv, Ukraine.
The Holy Father said that a possible visit to Ukrainian capital of Kyiv, is on  the table. This trip starts his 36th Apostolic journey to the island nation of Malta.
It is the President of Ukraine who, while speaking to Pope Francis several times by phone, asked him to visit the nation, while it is at war, and to try to mediate between Ukraine and Russia.
The Pope has also engaged in videocalls with the leader of the Russian Orthodox Church, Patriarch Kirill of Moscow.
On the plane Pope Francis received a painting by an African migrant depicting his shipwreck as he travelled across the Mediterranean Sea where his friends died. Daniel, the artist, is the African migrant he will meet on Sunday afternoon at the “Pope John XXIII Peace Lab” in Hal Far. The picture was consigned to him by Spanish journalist Eva Fernández, of the Cope Catholic network. The painting represents Daniel’s own shipwreck as he travelled on a rubber dinghy boat across the Mediterranean to enter Europe, leaving behind his companions whom he wasn’t able to save. 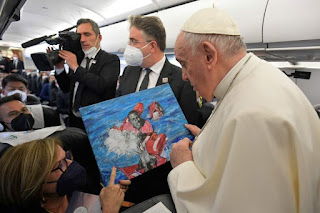 This tragedy has left a deep scar in his heart. "I'm not sure if this painting reflects what I really feel, because my heart is still bleeding”, he says. “A part of my soul was ripped out that day”. Daniel gives a poignant recount of those tragic moments: “No matter how much I stretched out my hands out, I couldn't save my brothers from death”, he explains. “The only one I could have dragged onto the dinghy did not want me to save him when he realized that I would not be able to save the others. His aim was to earn money in Europe to help his mother in Nigeria. Another of my brothers wanted to become a professional footballer”, he adds. “Another one dreamed of becoming an artist. That night, they drowned in the Mediterranean before my eyes”.
Edited from Vatican News