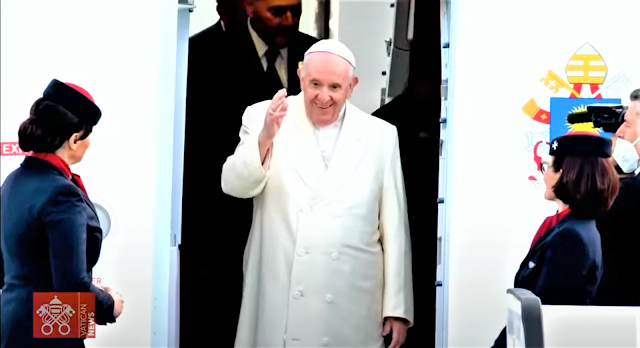 Pope Francis has departed from Malta, ending his two-day Apostolic Journey to the island.
Pope Francis has completed, his 36th Journey abroad, and the first of 2022.
The Air Malta Boeing brought him back to the Vatican just after 7 pm local time. There was short farewell ceremony at Malta’s International Airport, in the presence of President George Vella and other dignitaries.
This visit had been delayed two time due to the pandemic.
The island of Malta, is located at the center of the Mediterranean Sea,  and is a port of rescue and shelter for many migrants and refugees.
The theme of the Journey, “They showed us unusual kindness”, recalling, St Paul's shipwreck there on his way to Rome around 60 A.D.
This is the fourth time a Pope has traveled to Malta. St. John Paul II visited in 1990 and 2001, and Pope Benedict XVI visited in 2010.

One highlight of the weekend visit included a meeting with authorities at the Presidential Palace.
During the visit, Pope Francis boarded a catamaran taking him to the island of Gozo where he prayed at the Marian Shrine of Ta’Pinu.
On Sunday he celebrated Holy Mass for the people of Malta, 85% of whom profess to be Catholic, visited the Grotto of Saint Paul in Rabat, prayed for peace and fraternity, and spent time with migrants at the “John XXIII Peace Lab” Migrant Center in Hal Far.
Pope Francis is scheduled to land in Rome at about 8.45 pm local time.
Edited from VaticanNews