Feast April 26 : Our Lady of Good Counsel with Short History and Novena Prayer to Share! 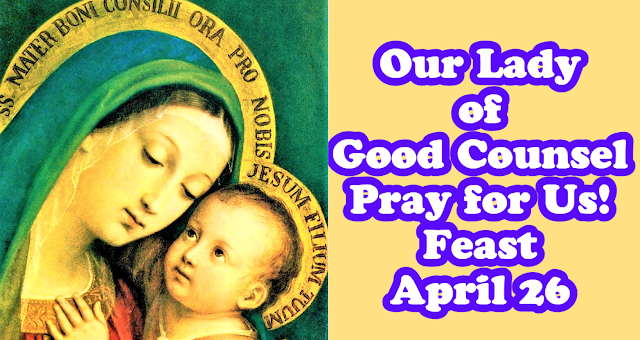 HISTORY OF OUR LADY OF GOOD COUNSEL (Novena is below the Video)
Records dating from the reign of Paul II (1464-71) relate that the picture of Our Lady, at first called "La Madonna del Paradiso" and now better known as "Madonna del Buon Consiglio", appeared at Genazzano, a town about twenty-five miles southeast of Rome, on St. Mark's Day, 25 April, 1467, in the old church of Santa Maria, which had been under the care of Augustinians since 1356. The venerated icon itself, which is drawn on a thin scale of wall-plaster little thicker than a visiting-card, was observed to hang suspended in the air without the slightest apparent support; thus early tradition, which furthermore tells how one might have passed a thread around the image without touching it. At once devotion to Our Lady inSanta Maria sprang up; pilgrim-bands began to resort thither; while miracles in ever-increasing numbers, of which a register was opened two days after the event, were wrought, as they still continue to be, at the shrine. In July following, Pope Paul deputed two bishops to investigate the alleged wonder-working image. Their report, however, is not known to be extant. The cult of Our Lady increased. In 1630 Urban VIII himself went to Genazzano on a pilgrimage, as did Pius IX in 1864. On 17 November, 1682, Innocent XI had the picture crowned with gold by theVatican Basilica. In 1727 Benedict XIII granted the clergy of Genazzano an Office and Mass ofOur Lady for 25 April, anniversary of the apparition, elsewhere the feast being kept a day later so as not to conflict with that of St. Mark the Evangelist. On 2 July, 1753, Benedict XIVapproved of the Pious Union of Our Lady of Good Counsel for the faithful at large, and was himself enrolled therein as its pioneer member; Pius IX was a member, and also Leo XIII. On 18 December, 1779, Pius VI, while re-approving the cult of Our Lady, granted all Augustinians anOffice with hymns, lessons, prayer and Mass proper of double-major rite; with a plenary indulgence also for the faithful, to which Pius VIII added another for visitors to the shrine. On 18 December, 1884, Leo XIII approved of a new Office and Mass of second-class rite for allAugustinians, while on 17 March, 1903, he elevated the church of Santa Maria — one of the four parish churches at Genazzano — to the rank of minor basilica; and, on 22 April following, authorized the insertion in the Litany of Loreto of the invocation "Mater Boni Consillii" to follow that of "Mater Admirabilis". The same pontiff, ten years earlier (21 December, 1893) hadsanctioned the use of the White Scapular of Our Lady of Good Counsel for the faithful. In the United States there are many churches and institutions in honour of Our Lady of Good Counsel.
SHARED FROM CATHOLIC ENCYCLOPEDIA

NOVENA TO OUR LADY OF GOOD COUNSEL
FEAST APRIL 26 (A novena is a prayer to be said for 9 days - usually 1 Our Father, 1 Hail Mary and 1 Glory Be is said each day)

Holy Virgin, moved by the painful uncertainty we experience in seeking and acquiring the true and the good, we cast ourselves at thy feet and invoke thee under the sweet title of Mother of Good Counsel. We beseech thee: come to our aid at this moment in our worldly sojourn when the twin darknesses of error and of evil that plots our ruin by leading minds and hearts astray.

Seat of Wisdom and Star of the Sea, enlighten the victims of doubt and of error so that they may not be seduced by evil masquerading as good; strengthen them against the hostile and corrupting forces of passion and of sin.

Mother of Good Counsel, obtain for us from thy Divine Son the love of virtue and the strength to choose, in doubtful and difficult situations, the course agreeable to our salvation. Supported by thy hand we shall thus journey without harm along the paths taught us by the word and example of Jesus our Savior, following the Sun of Truth and Justice in freedom and safety across the battlefield of life under the guidance of thy maternal Star, until we come at length to the harbor of salvation to enjoy with thee unalloyed and everlasting peace. Amen.
(By Pope Pius XII, 23 January 1953)