Head of the Catholic Church in Ukraine says "We have seen the war crimes of looting, outright robbery, when all property taken from killed and wounded Ukrainians...." 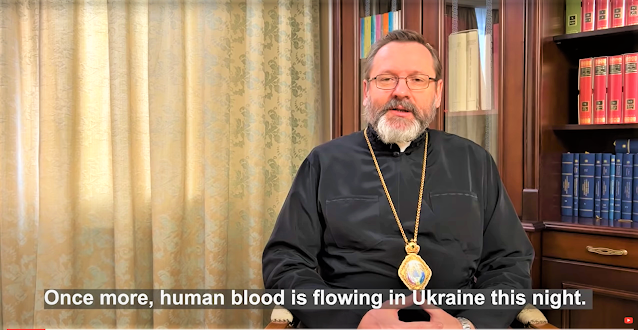 This message of His Beatitude Sviatoslav, Father and Head of the Ukrainian Greek Catholic Church, in his daily military video address on the 50th of Russia's war against Ukraine.
Glory to Jesus Christ!
Dear brothers and sisters in Christ! Today is April 14, 2022, the 7th week and 50th day of the war, the nationwide opposition of Ukraine to the Russian occupiers. Human blood is flowing in Ukraine again tonight. Our glorious Kharkiv was subjected to heavy shelling. The city is, in fact, paralyzed, people have been in bomb shelters for the second day. Mykolayiv, the whole south of Ukraine, came under fire. There is a heroic Mariupol.
However, storks flew to the villages and towns of Ukraine and built their nests over fires, over mutilated houses, over new cemeteries. Spring is coming, life goes on. Ukrainians know how to survive and with their vitality and ability to withstand war give hope. This is the hope that comes from faith in the risen Christ, in the Lord's Passover, for which we are preparing.
Ukraine stands. Ukraine lives. Ukraine is struggling.
Today we will reflect on the seventh commandment of God, which commands: "Do not steal!". By this commandment, this law of God, the Lord God protects the dignity of man as a co-creator with God, as the one to whom He entrusted his creation - he entrusted this creation to care for, to consult in it, to develop it. By this commandment of God, the Lord God protects dignity and shows the value of human labor, and thus the glory of a farmer, laborer, worker, who benefits from God's blessed work and the fruits of his hands.
He who does not respect the work of his neighbor, its fruits, the private property of man, he will never enjoy well-being. There will never be plenty in a country where the good of another person is despised.
These days in Ukraine we see how Ukrainians know how to share their good with those who need help. They open the space of their own wealth to those who find themselves in trouble.
At the same time, we have witnessed grave crimes against the dignity of a person who knows how to bear fruit through his work. We saw how the occupiers around Kyiv, in the Chernihiv region, prepared people for famine, did not allow them to work, forbade them to go to the fields that were mined, and simply cynically killed livestock. We have seen the war crimes of looting, outright robbery, when all property taken from killed and wounded Ukrainians was taken away, when a person's life was less valuable in the eyes of the occupiers than what they could steal from this person. The Ukrainian people despise these shameful actions of looters in abandoned houses.
We know that this looted property is traded in Russia and Belarus. I want to remind everyone that whoever buys what is stolen or looted becomes an accomplice to the crime. The stolen thing becomes coal in the hands of those who hold it, and burns those hands. Such a people, such people are thieves, will never have God's blessing and will die in poverty.
Today we ask the Lord God to bless Ukraine with prosperity and prosperity, give us the strength to rebuild everything destroyed, give us the strength to feed the children of our people, give us the strength to work on our land, which is ready to give us generous fruit with its strength and vitality. We want to win our victory with respect for other people's property. God bless Ukraine. Bless all those who know how to respect others and have their own. God bless our army, which protects the life and well-being of Ukraine. God bless Ukraine as the breadbasket of Europe, as the spiritual treasure of the whole world.
The blessing of the Lord be upon you, by His grace and love of man, always, now, and always, and forever and ever. Amen.
Source: UGCC Youtube Channel