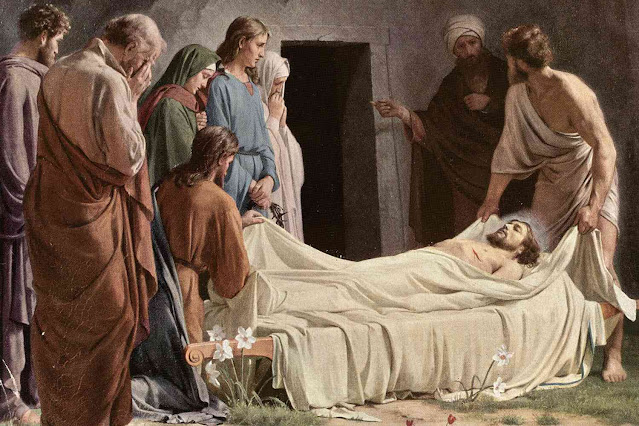 The rubrics of the Missale Romanum remind us that Holy Saturday is the "mother of all vigils" is the "greatest and most noble of all solemnities and it is to be unique in every single Church" ( Missale Romanum, "Rubrics for the Easter Vigil" (EV), no.2). On this holy night, the Church keeps watch, celebrating the resurrection of Christ in the sacraments and awaiting his return in glory. It is the turning point of the Triduum, the Passover of the new covenant, which marks Christ's passage from death to life. Therefore, the Easter Vigil does not correspond to the usual Saturday evening Mass and its character is unique in the cycle of the liturgical year.
History:

In the primitive Church Holy Saturday was known as Great, or Grand, Saturday, Holy Saturday, the Angelic Night, the Vigil of Easter, etc. It is no longer, like Maundy Thursday, a day of joy, but one of joy and sadness intermingled; it is the close of the season of Lent and penance, and the beginning of paschal time, which is one of rejoicing. We remember how Jesus was laid in the tomb and ressurected on the 3rd day.

By a noteworthy exception, in the early Church this was the only Saturday on which fasting was permitted (Constit. Apost., VII, 23), and the fast was one of special severity. Dating from the time of St. Irenaeus, an absolute fast from every kind of food was observed for the forty hours preceding the feast of Easter, and although the moment assigned for breaking the fast at dawn on Sunday varied according to time and country, the abstinence from food on Holy Saturday was general.

The night of the vigil of Easter has undergone a strange displacement. During the first six or seven centuries, ceremonies were in progress throughout the entire night, so that the Alleluia coincided with the day and moment of the Resurrection. In the eighth century these same ceremonies were held on Saturday afternoon and, by a singular anachronism, were later on conducted on Saturday morning, thus the time for carrying out the solemnity was advanced almost a whole day. Thanks to this change, special services were now assigned to Holy Saturday whereas, beforehand, it had had none until the late hour of the vigil.

This vigil opened with the blessing of the new fire, the lighting of lamps and candles and of the paschal candle, ceremonies that have lost much of their symbolism by being anticipated and advanced from twilight to broad daylight. St. Cyril of Jerusalem spoke of this night that was as bright as day, and Constantine the Great added unprecedented splendour to its brilliancy by a profusion of lamps and enormous torches, so that not only basilicas, but private houses, streets, and public squares were resplendent with the light that was symbolic of the Risen Christ. The assembled faithful gave themselves up to common prayer, the singing of psalms and hymns, and the reading of the Scriptures commentated by the bishop or priests. The vigil of Easter was especially devoted to the baptism of catechumens who, in the more important churches, were very numerous. On the Holy Saturday following the deposition of St. John Chrysostom from the See of Constantinople, there were 3000 catechumens in this church alone. Such numbers were, of course, only encountered in large cities; nevertheless, as Holy Saturday and the vigil of Pentecost were the only days on which baptism was administered, even in smaller churches there was always a goodly number of catechumens. This meeting of people in the darkness of the night often occasioned abuses which the clergy felt powerless to prevent by active supervision unless by so anticipating the ceremonies that all of them could take place in daylight. Rabanus Maurus, an ecclesiastical writer of the ninth century (De cleric. Instit., II, 28), gives a detailed account of the ceremony of Holy Saturday. The congregation remained silent in the church awaiting the dawn of the Resurrection, joining at intervals in psalmody and chant and listening to the reading of the lessons. These rites were identical with those in the primitive Church and were solemnized at the same hours, as the faithful throughout the world had not yet consented to anticipate the Easter vigil and it was only during the Middle Ages that uniformity on this point was established.

The Service of Light