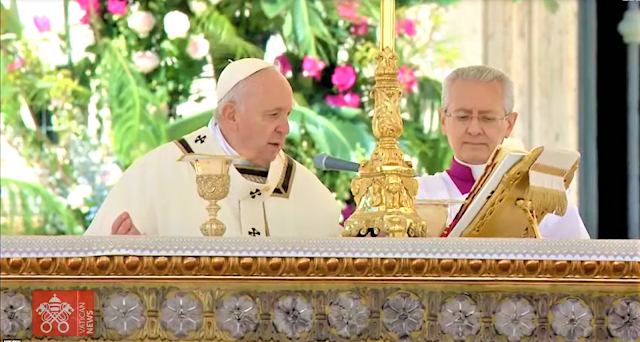 Pope Francis celebrated Easter Sunday Mass outdoors in St Peter's Square.  50,000 faithful, attended and the joy of Easter and the message of peace brought by the risen Jesus was expressed.
Vatican News reports that, the celebration of Easter Mass was crowded, and sunny.
FULL TEXT Booklet of the Mass from the Vatican:
https://www.vatican.va/news_services/liturgy/libretti/2022/202220417-libretto-domenica-di-pasqua.pdf
The rite of "Resurrexit" began on the parvis of the square decorated with 40,000 flowers brought from Holland.
The deacons opened the doors of the icon of the Most Holy Saviour which the Pope incensed, returning after two years of pandemic to celebrate Easter Sunday together.
The first reading, taken from the Acts of the Apostles, recalling St Peter's words to the Colossians, was followed by the singing of the Easter Sequence, after which the Gospel of John was proclaimed in Latin and Greek - recounting the discovery of the empty tomb and the disciples' bewilderment at not having yet understood the Scripture, "that He was to rise from the dead". The Pope and the assembly then fell silent after the proclamation of the Word of God; thus, there was no homily.
In the prayer of the faithful in various languages, an appeal was made to world leaders to seek the common good. Prayers followed in Ukrainian, for the deceased, so that they may participate in the eternal Easter. After the Eucharist, Pope Francis' blessing concluded the Easter Mass, with the delivery to "go in peace", a peace that today needs to be asked for with insistence and prayer. After the Mass, Pope Francis left in his Popemobile and greeted the faithful, stopping to return an affectionate gesture with a wave. This was the first trip down Via della Conciliazione for some time - marking a long-awaited return to normality after the pandemic.
Source: Edited from Vatican News