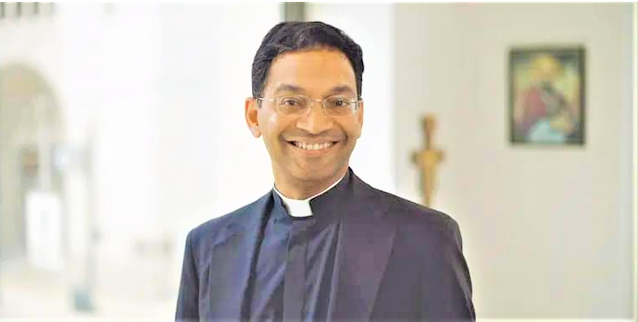 WASHINGTON - Pope Francis has named Father Earl K. Fernandes, a priest of the Archdiocese of Cincinnati, as the Bishop of Columbus. The appointment was publicized in Washington on April 2, by Archbishop Christophe Pierre, apostolic nuncio to the United States.

Father Fernandes was born on September 21, 1972, in Toledo, Ohio. He attended St. Francis de Sales High School in Toledo, and then the University of Toledo where he earned a bachelor’s degree in biology. Father Fernandes attended Mount Saint Mary’s Seminary of the West in Cincinnati and holds a licentiate and doctoral degree in moral theology from the Alphonsian Academy in Rome, Italy (2004-2008). He was ordained to the priesthood on May 18, 2002, for the Archdiocese of Cincinnati.

Bishop-elect Fernandes’ assignments after ordination include: parochial vicar of Holy Angels parish, and religion teacher at Lehman Catholic High School in Sidney (2002-2004); dean and assistant professor of moral theology at Mount Saint Mary’s Seminary of the West in Cincinnati (2008-2016); and administrator of Sacred Heart parish in Cincinnati (2014-2016). From 2012-2016, he served as a member of the executive committee for the National Association of Catholic Theological Schools. During the the Extraordinary Jubilee Year of Mercy from 2015-2016, Father Fernandes was named a missionary of mercy. From 2016 to 2019, Father Fernandes served as a secretary at the Apostolic Nunciature in Washington, D.C. Since 2019, he has been pastor of Saint Ignatius of Loyola parish in Cincinnati, and since 2020, he has served as a member of the board of trustees at the Pontifical College Josephinum in Columbus.

In addition to English, Bishop-elect Fernandes is fluent in Italian, Spanish, and French, and has reading knowledge of Latin.