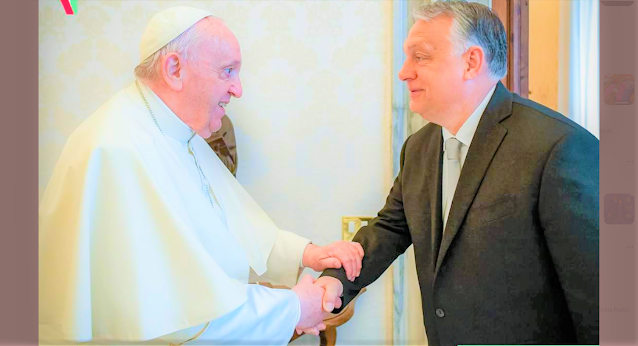 Pope Francis hosted Prime Minister Viktor Orbán at the Apostolic Palace, on his first official trip abroad since his re-election. On Thursday, April 21st 11 a.m., the Pope received the Hungarian Prime Minister in his study, and the meeting ended after a 40-minute discussion.

Viktor Orbán and his wife, Anikó Lévai - Deputy Prime Minister Zsolt Semjén, accompanied by Ambassador Eduárd of Habsburg-Lorraine - attended Mass at the altar of St. Joseph's Basilica in St. Peter's Basilica prior to the audience.

At the end of the discussion, Viktor Orbán's wife and escort were brought into the room, and the exchange of gifts took place. The Hungarian Prime Minister presented the Holy Father with an English-Latin prayer book printed in 1750, a volume about Béla Bartók and another with his works. "As few people speak Hungarian besides us, I brought Hungarian music as a gift, because those who listen to it understand our hearts," Viktor Orbán presented the special CD series to the pope, who acknowledged with satisfaction: "Bela Bartok".

The Holy Father, gave the Prime Minister a plate-sized round bronze plaque: “I have chosen this relief for you from the workshop of the Vatican. It depicts St. Martin, who was a Hungarian man - well, I know - was a Roman province of Pannonia, but still, you are the People of St. Martin. And this robe, which was cut in two, and laid upon the shoulder of the poor, and showed him with his hand, was the ministry which they tested for them. And that poor person means the half a million refugees you have now received. ” In addition to the bronze plaque of St. Martin, he donated a copy of Pope Francis' apostolic exhortations. “I dedicated this year’s message for World Peace Day to you this morning,” the Holy Father pointed to his signature next to the seal. In addition, the pope presented the guest with a document on the Brotherhood of Humanity signed in Abu Dhabi in 2019 and a memorable Statio Orbis held on March 27, 2020 by St. Peter, which was published by the Vatican Publishing House.