Saint April 30 : St. Marie of the Incarnation and Founder of the Ursulines in Canada 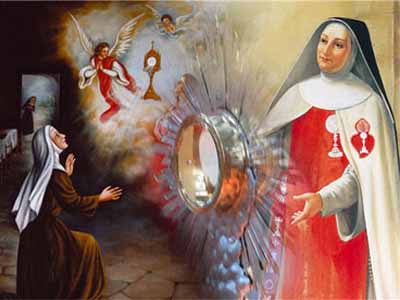 Prayer to the Incarnate Word by St. Marie
It is through the Heart of my Jesus, my way, my truth and my life that I draw near to you, O Eternal Father. By this divine Heart I adore you for all those who do not adore you; I love you for all those who don't love you; I adore you for all the blind volunteers who out of contempt do not know you. I want by this divine heart to satisfy for all mortals. I go around the world in spirit to seek there all the souls redeemed by the very precious Blood of my divine Spouse in order to satisfy you for all by this divine Heart; I embrace them to present them to you through him and through him I ask you for their conversion. Oh what! Eternal Father, will you suffer that they do not recognize my Jesus, and live for him, who died for all? You see, O divine Father, that they do not yet live; Ah! let them live by this divine Heart. On this adorable Heart, I present to you all the workers of the Gospel so that you may fill them with your Holy Spirit. On this Sacred Heart, as on a divine Altar, I present to you in particular... (name the people for whom we want to pray).
You know, O Incarnate Word, Jesus my Beloved, all that I want to say to the Father, through your divine Heart and through your holy Soul. I tell you this by telling him, because you are in your Father and your Father is in you; do all this with him. I present to you all these souls, let them be the same thing with you. Amen

Life in France and Spiritual Vocation
As a child, Marie Guyart, daughter of a master baker, showed unusual spirituality. Her husband, Claude Martin, died in 1619 after two years of marriage, leaving her with a six-month-old son and a bankrupt business. Urged to remarry, she withdrew into secluded meditation and prayer and on 24 March 1620 experienced a mystical and emotional "conversion." She decided to withdraw from the world, but her sister and brother-in-law called on her to help their failing carrier business. Under Marie the business prospered but visions continued to haunt her.
Founder of the Ursuline Order in Canada
In 1632, though heartbroken at leaving her son, she entered the Ursuline cloister at Tours. She took her vows in 1633 and taught Christian doctrine for six years. From her reading of the Relations des Jésuites and her visions, she concluded that her vocation was in Canada. With two Ursulines and Mme de la Peltrie, she landed at Québec on 1 August 1639 and established a convent in the lower town. In 1642, it moved to a permanent stone building in the upper town. She worked zealously at educating French and Aboriginal girls, wrote numerous theological and spiritual treatises, an Iroquois catechism and Algonquian and Iroquois dictionaries (see Aboriginal Languages), and kept abreast of public affairs. Although cloistered, she received many notable visitors at her monastery. Canonization
In 1980, Marie de l’Incarnation, François de Laval, and Jose de Anchieta (the “Apostle of Brazil”) were officially declared “Blessed” by Pope John Paul II (this process is known as beatification and is often a step towards canonization, or the declaration of sainthood). On 3 April 2014, Pope Francis declared all three saints, using a process known as “equivalent canonization,” which does not require the verification of miracles made through the saint’s intervention. The canonization was celebrated on 12 October 2014 during the Thanksgiving mass at St. Peter’s Basilica in Rome. Cardinal Gérald Cyprien Lacroix, Archbishop of Québec, led a delegation from Québec which attended the ceremony.
Text : Catholic Encyclopedia