Ukraine Church Leader says "This is the 47th day of pain, blood, suffering, human tears, mass killings, and a large number of refugees." 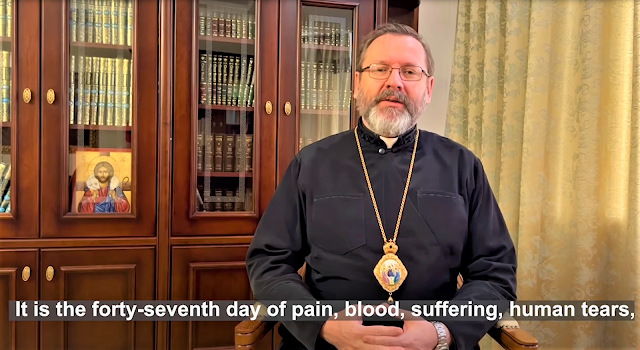 His Beatitude Sviatoslav, Father and Head of the Ukrainian Greek Catholic Church, said this in his daily  address:

Glory to Jesus Christ!
Dear brothers and sisters in Christ! Today is April 11, 2022 and Ukraine is experiencing the 47th day of nationwide resistance to Russian occupation. This is the 47th day of pain, blood, suffering, human tears, mass killings, and a large number of refugees. This is the 47th day of national grief.
However, Ukraine stands, Ukraine is struggling.
Communicating with people here in Kyiv region, we notice that many people, men, even in territorial defense, are afraid that victory will come without their participation, and after the liberation of Kyiv region, Chernihiv region, they ask where the struggle is going. In our military registration and enlistment offices there are queues of those who want to defend their Motherland, their native people.
Heavy fighting is taking place this night and the last day, the enemy is shelling Kharkiv and Mykolayiv, and there is not a single city in the Luhansk region that has not been heavily bombed. According to the latest UN figures, 1,800 people have died in Ukraine. The real number is probably several times, maybe ten, higher, because only now are they starting to find the dead in the liberated towns and villages. About 1,500 people have officially gone missing, and we have no information about them. There is a high probability that they also died.
Against the background of this cruelty and, at the same time, heroism, greatness of the Ukrainian people, I would like to reflect with you today on the fourth commandment of God "Honor your father and mother, that you may be well and that you may live on earth for many years." Father and mother are the source of life for each person and serve as the image of our God, the Giver of Life. Their fatherhood and motherhood are the image of God the Savior who cares for his child, creates a space of life and security for him and wishes her well and happiness. That is why it is so important to be able to respect your parents for your own longevity.
Speaking of parents, the fourth commandment of God protects every elderly person. We are shocked to see how Ukrainians really know how to honor their elders, how even during the evacuation they carefully carry bedridden patients, including dad or mom.
Today, our priests and volunteers visit elderly people in the cities and villages of Ukraine who are left alone. And this is one way to see the power of God in their eyes. Each such visit is a great enrichment. The elders say, "You have come to us, so the Lord God has not forgotten us." And for us, the younger generation, older people are teachers of life. They pass on to us the true values ​​of life, which can be a solid foundation for building our way of life. Let us remember today the elders who are most vulnerable in this brutal war.
I was very impressed by the story from Lukashivka in Chernihiv region. She talks about how the occupiers treated, in particular, older people. An eyewitness, Mykola, a senior man in his 70s, said that when Russians came to the village, they drove about 140 people into the basement of a 60-square-meter school. They were not allowed to go outside and the dead were with the living. Among those driven to the basement were 50 children. In order to sleep, Mr. Mykola tied a scarf to the Swedish wall and fell asleep in a suspended position so as not to step on those around him.
Behavior like our enemy has no future. He who does not honor his father and mother, who does not respect old age, cannot have God's blessing and live long on this earth.
God, accept the sacrifice of Ukraine, the sacrifice of love for You, God, and for your neighbor! Look at the tears of our elders, weak people who need Your help! God bless our army, which defends Ukraine, life, fights for peace in our Motherland! God, give Ukraine victory! We all pray together for the victory of good over evil in Ukraine!