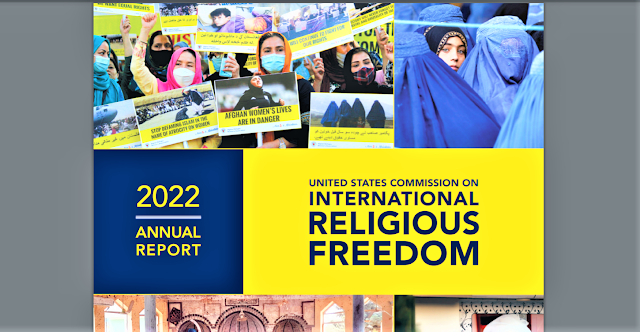 USCIRF Releases 2022 Annual Report with Recommendations for U.S. Policy
Recommends Afghanistan as Country of Particular Concern
Washington, D.C. – The United States Commission on International Religious Freedom (USCIRF) today released its 2022 Annual Report documenting developments during 2021, including significant regress in countries such as Afghanistan and the Central African Republic (CAR). USCIRF’s 2022 Annual Report provides recommendations to enhance the U.S. government’s promotion of freedom of religion or belief abroad.
The report also notes USCIRF recommendations implemented by the U.S. government—including the designation of Russia as a country of particular concern, the imposition of targeted sanctions on religious freedom violators, and genocide determinations for atrocities perpetrated by the Chinese government against Uyghur and other Turkic Muslims and by the Burmese military against Rohingya Muslims.
“We are disheartened by the deterioration of freedom of religion or belief in some countries— especially Afghanistan under the Taliban’s de facto government since August. Religious minorities have faced harassment, detention, and even death due to their faith or beliefs, and years of progress toward more equitable access to education and representation of women and girls have disappeared,” USCIRF Chair Nadine Maenza said. “Meanwhile, USCIRF is encouraged by the Biden administration’s continued prioritization of international religious freedom during its first year. To continue this progress, we strongly urge the administration to implement USCIRF’s recommendations—in particular, to expand its Priority 2 refugee designation to grant access for at-risk religious groups in Afghanistan, and to designate Nigeria as a country of particular concern.”
USCIRF’s independence and bipartisanship enables it to unflinchingly identify threats to religious freedom abroad. In its 2022 Annual Report, USCIRF recommends 15 countries to the State Department for designation as “countries of particular concern” (CPCs) because their governments engage in or tolerate “systematic, ongoing, and egregious violations.” These include 10 that the State Department designated as CPCs in November 2021:
Burma,
China,
Eritrea,
Iran,
North Korea,
Pakistan,
Russia,
Saudi Arabia,
Tajikistan, and
Turkmenistan—as well as five others:
Afghanistan,
India,
Nigeria,
Syria, and
Vietnam.
For the first time ever, the State Department designated Russia as a CPC in 2021, which USCIRF had been recommending since 2017. Regrettably, the State Department removed Nigeria as a CPC though it had been added the previous year and religious freedom conditions remain dire.
The 2022 Annual Report also recommends 12 countries for placement on the State Department’s Special Watch List (SWL) based on their governments’ perpetration or toleration of severe violations.
These include three that the State Department placed on that list in November 2021:
Algeria,
Cuba, and
Nicaragua—as well as nine others:
Azerbaijan,
Central African Republic,
Egypt,
Indonesia,
Iraq,
Kazakhstan,
Malaysia,
Turkey, and
Uzbekistan.
In 2021, USCIRF removed CAR from its SWL recommendations because incidents of religious targeting and violence had decreased during 2020, but these trends have since been reversed.
The 2022 Annual Report further recommends to the State Department seven non-state actors for redesignation as “entities of particular concern” (EPCs) for systematic, ongoing, egregious violations. The State Department designated all seven of these groups as EPCs in November 2021: al-Shabaab, Boko Haram, the Houthis, Hay’at Tahrir al-Sham (HTS), Islamic State in the Greater Sahara (ISGS), Islamic State in West Africa Province (ISWAP or ISIS-West Africa), and Jamaat Nasr al-Islam wal Muslimin (JNIM).
“Throughout the past year, the U.S. government continued to condemn abuses of religious freedom and hold perpetrators accountable through targeted sanctions and other tools at its disposal. Moving forward, the United States should take additional steps to support freedom of religion or belief around the world. USCIRF’s 2022 Annual Report makes recommendations on how Congress and the Executive Branch can further advance this universal, fundamental human right,” USCIRF Vice Chair Nury Turkel stated.
In addition to chapters with key findings and U.S. policy recommendations for these 27 countries, the annual report describes and assesses U.S. international religious freedom policy overall. The report also highlights important global developments and trends related to religious freedom during 2021—including in countries that do not meet the criteria for CPC or SWL recommendations. These include: the COVID-19 pandemic and religious freedom, blasphemy and hate speech law enforcement, transnational repression, religious intolerance in Europe, deteriorating religious freedom conditions in South Asia, and political upheaval that raises religious freedom concerns.
The report also includes sections highlighting key USCIRF recommendations that the U.S. government has implemented from USCIRF’s 2021 Annual Report, discussing human rights violations perpetrated based on the coercive enforcement of interpretations of religion, and providing details on individuals included in USCIRF’s Freedom or Religion or Belief (FoRB) Victims List and Religious Prisoners of Conscience Project.
###
The U.S. Commission on International Religious Freedom (USCIRF) is an independent, bipartisan federal government entity established by the U.S. Congress to monitor, analyze, and report on religious freedom abroad. USCIRF makes foreign policy recommendations to the President, the Secretary of State and Congress intended to deter religious persecution and promote freedom of religion and belief. To interview a Commissioner, please contact USCIRF at Media@USCIRF.gov.
Press Release Source: https://www.uscirf.gov/news-room/releases-statements/uscirf-releases-2022-annual-report-recommendations-us-policy