What is Holy Week? Explanatory Video and Free Resources! - All you Need to Know about #HolyWeek 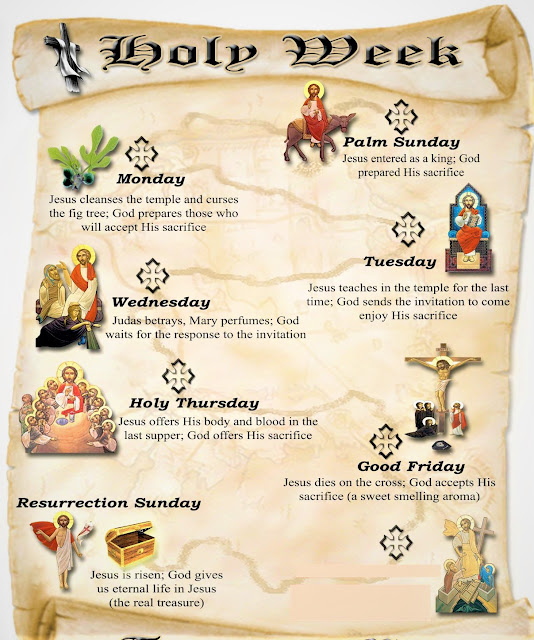 The solemn liturgies of the Triduum, which start on Thursday of Holy Week, are the most important liturgies of the Church year teaching the meaning of Christ's life, death and resurrection. People gather to commemorate the three pillars of the Catholic faith: the Sacrament of Holy Communion, the Priesthood and the Mass.
5 Activities for Families in Holy Week:
1. Pray the Stations of the Cross
2. Make Crosses out of Palm Branches
3. Colour Easter Eggs and/or Bake Hot Cross Buns
Recipe: https://www.catholicnewsworld.com/2022/04/free-catholic-recipe-hot-cross-buns-for.html
4. Clean Your House in Preparation for Easter
5. Pray the Sorrowful Mysteries Together
FREE Downloads Coloring Pages for Holy Week for Kids:
Download Good Friday Notebooking Page
Download the Holy Thursday Notebooking Page
During the Chrism Mass, the Holy Oils to be used throughout the coming year for Sacraments of Baptism, Confirmation, Holy Orders and the Anointing of the Sick are consecrated. The Mass of the Lord's Supper is traditionally held after sundown.
This commemorates the Institution of the Sacrament of Holy Communion and recalls the Last Supper of Our Lord. It was at this last supper that Christ after he was betrayed, offered His Body and Blood to God the Father, under the species of bread and wine which he gave to the Apostles as spiritual nourishment, commanding them and their successors in the priesthood to perpetuate this offering. At the Mass of the Lord's Supper it is traditional in Catholic dioceses for the archbishop or bishop to wash the feet of 12 priests to symbolise Christ's washing of the feet of His Apostles and a symbol of service everyone is called to live.
This Mass ends in silence, the Blessed Sacrament is carried in procession to the Altar of Repose where it will remain until Mass the following day. Good Friday commemorates the crucifixion of Jesus and is the most solemn day in the Christian calendar. It is a day of quiet fasting and mourning, remembering again how Jesus suffered and died for our sins.Christ has died. Christ is Risen. Christ will come again.  During the Solemn Commemoration of the Lord's Passion the ceremony and prayers are solemn and reflective. The pulpit and altar will be bare; no candles lit. This creates the awareness of grief over the sacrifice of God's only begotten Son. Communion will be distributed - the hosts having been blessed in the Thursday Mass. On Holy Saturday the service begins in a darkened Church. There is the blessing of new fire, lighting of the paschal candle and the Easter Proclamation. These are the most important days of remembrance and celebration in the Catholic Church. The Easter Triduum is the holiest time of the year in the Catholic Church. The Easter fast, begun on Good Friday ends on Sunday, when the world celebrates the Resurrection of Our Lord. Statues and artworks covered for Lent are uncovered, the altar is no longer bare and the entire church is filled with flowers. The Palm Sunday celebration commemorated Christ's arrival in ancient Jerusalem riding on a small donkey to be greeted by exuberant crowds hailing him as the Messiah and waving palm leaves. As we know before the week was out, Christ had been betrayed and arrested. What followed was the Lord's terrible suffering and his crucifixion outside the walls of the city. But three days later came His glorious resurrection which Catholics and Christians of all denominations celebrate on Easter Sunday. With Information from the Archdiocese of Sydney