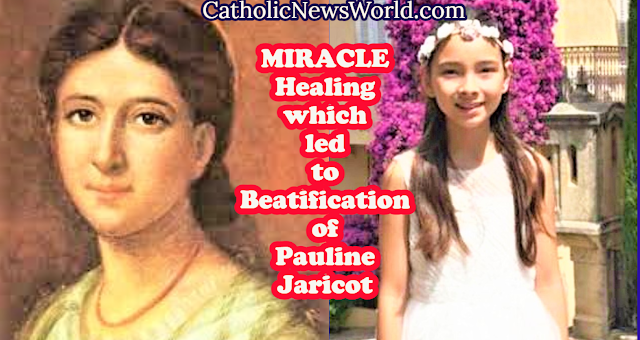 Pauline Jaricot, founder of the Society for the Propagation of the Faith, will be beatified on May 22, 2022, in Lyon, France. At the centre of this beatification: Mayline Tran, a child whose survival was recognized as a miracle by the Church.

Pauline Jaricot was born in Lyon, France, on July 22, 1799 into a family of wealthy silk workers from Lyon. In 1816 she underwent a conversion following a sermon on vanity heard in the Saint-Nizier church in Lyon, an inner transformation takes place and her life changes radically: she abandons her jewellery, decides to dress simply like the workers and visits and serves the poor. On Christmas Day 1816, she makes a private vow of chastity in the chapel of Notre Dame de Fourvière. At the age of 19, she organized "the collection of the mission's penny," from her father's workers, inventing the first missionary social network. The system is later institutionalized with the creation of the Society for the Propagation of the Faith in 1822. It grew very quickly in all France, in Europe then in the whole world. She also founded the Missio charity. In 1826, she founded the Living Rosary, at the age of twenty-seven, which she used to encourage faith in her contemporaries. The Living Rosary brought together its members in fortnights, in a spiritual communion by saying a dozen rosaries every day.  In France, there were more than 2,250,000 associates of the Living Rosary at the death of Pauline Jaricot, not counting members from foreign countries. This work is still active and present in most countries. In 1833, she settled in Lorette with the "daughters of Mary", a community of pious young girls that she had just founded.   Jaricot died in poverty on January 9, 1862, while the works she founded radiated throughout the world. In 1922, a century after its foundation , the work of the Propagation of the Faith inspired by Pauline was elevated by Pope Pius XI to the rank of pontifical work and saw its headquarters transferred to Rome. In 1926, the same pope paid homage to the missionary genius of Pauline and introduced her cause for beatification. For the first time, the whole Church is called to celebrate Universal Mission Sunday, the penultimate Sunday of October.

Who is Mayline Tran, the young girl whose miraculous healing is behind the beatification of Pauline Jaricot?

The Miraculous intercession of Pauline for Mayline Tran was what allowed the beatification to proceed.

Mayline and her parents came to the Saint-Polycarpe church (Lyon 1er). Her father, Emmanuel, authored a book recounting the miraculous healing. One evening in 2012, his then 3-year-old daughter choked on a small sausage. “She went into cardiorespiratory arrest, I gave her a heart massage while waiting for help. At the hospital, she had several more arrests, and a pulmonary embolism, before falling into a coma. Ten days later, the exams were disastrous: her brain had stopped working. Everything was collapsing, ”he says, still very moved.

The medical professional announced the imminent cessation of care for the child, whose condition was deemed irreversible and hopeless. The parents refuse. “During this time, the mother of a school friend of Mayline launched a novena, a prayer lasting nine days addressed to Pauline Jaricot”, continues Emmanuel Tran. Unlike his wife, Nathalie, he was not religious.

The family, then living in Beaujolais, moved to Nice where the Tran had planned to open a restaurant. And then, almost overnight, Mayline's condition improved. She opened her eyes: her parents detected life there, where before, this neurological reflex only showed nothingness. “Nathalie then told me: she's here, she's come back. Although there were still moments of absence, his condition was improving rapidly. And one day she turned to my wife, and she said, 'Mom'…”

A doctor was present in the room at this precise moment. Neither he nor the rest of the medical community could explain this dramatic recovery. Very quickly, Mayline was able to get up, walk, resume her life. So began the long journey of recognizing the miracle. A long "trial", as it is called, and which ended two years ago with the validation of Pope Francis. "We had lived our miracle for a long time," smiles Emmanuel Tran. “Since then, we've made sure Mayline doesn't feel any different. Above all, that she is not cataloged as crazy. We protected her as best we could. »

He himself has progressed in his journey of faith. “We are normal people in a pretty normal world,” he adds. “You can feel overwhelmed, but for me, the important thing is to make people understand that miracles exist. It's hard to believe, like me in the past, we all have doubts. It's huge, we manage it as best we can, but in the end the message is very beautiful: everyone can benefit from it. »