#BreakingNews 200,000 People Join Pro-Life March for Life Across Columbia in 78 Cities with Support from the Catholic Bishops

This Saturday, April 30, 2022, hundreds of thousands of people attended the 16th national March for Life in Columbia. The people dressed in light blue and carrying banners and flags marched in more than 70 cities in Colombia to defend the life of the unborn child and say no to abortion. Jesús Magaña, president of Unidos por la Vida, the platform that organized the event, revealed that about 200,000 people attended the marches in 78 cities in the country.
At the 16th National March for Life in Colombia, a “Manifesto for Life” prepared by Unidos por la Vida was read. The manifesto recalled that the Colombian people “are outraged by judgment C-055 of 2022 in which four magistrates of the Constitutional Court and a second judge sentenced unborn babies up to 6 months of gestation to a cruel death penalty without any causal ”. 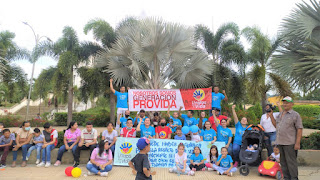 The candidates for the Presidency of the Republic were asked to sign the Pact for Life "as a sign of their commitment to generate actions and public policies that protect and promote all human life."
April 30, the United for Life citizen platform held its 16th National March for Life in Colombia, which seeks to " reject abortion, ask for real protection for women and demand from Congress a law that protects life from fertilization until its natural death ”.

This was announced by José de Jesús Magaña Martínez, director of this pro-life movement, who also added that, " this will be a moment where we are going to march to ask for the annulment of sentence C 055 of last February, which allows abortion for babies of 6 months of gestation ”.

The director noted that it is important to remember that " life is sacred and that it must be defended from conception to natural death, especially when this life is most vulnerable, that is, in the womb and at the end of it. ".

Coordination was being made so that the march took place in at least 70 cities in the country, such as Bogotá, Cali, Medellín, Barranquilla, Cartagena, Bucaramanga, Pereira and Manizales, among others.

In Bogotá, the march began at 10:00 am in the National Park, located on Carrera 7 with Calle 39. The invitation encourages attendees to carry United for Life flags, the light blue handkerchief of “Salvemos the 2 lives”, Colombian flags, whistles and masks.

For his part, Monsignor Francisco Antonio Ceballos Escobar, bishop of Riohacha and president of the Episcopal Commission for the Promotion and Defense of Life. Upon joining this initiative, he said: “ I would like to extend an invitation, with great joy, to all Colombians who love life, so that next April 30 we go out into the streets of our cities, express our love for life and demand the respect for life ” .

It should be remembered that on February 21, the Colombian Constitutional Court approved the decriminalization of abortion up to six months or 24 weeks of pregnancy. The ruling of the high court decreed that: “ The conduct of abortion will only be punishable when it is carried out after the twenty-fourth (24) week of gestation and, in any case, this time limit will not be applicable to the three cases established in the Judgment. C-355 of 2006 ”.