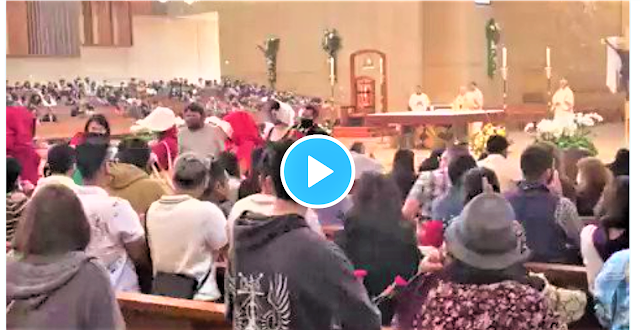 On Sunday, May 8th, 2022, during Mass at the Cathedral of Our Lady of the Angels in Los Angeles a disruption was initiated by anti-life protesters. The protestors wore costumes associated with the group Ruth Sent Us. This particular group encouraged people to protest Catholic Masses on Mother's Day.
Several videos posted on Twitter recorded the incident. It occurred at the cathedral's 10 a.m. Mass. Just before Communion, red robes and white bonnets or “handmaids” costumes by Margaret Atwood’s 1985 novel, “The Handmaid’s Tale.”
Despite the disruption, the Mass continued peacefully. During the Mass all the mothers present were given a special blessing and a rose.
The reasoning for  the protest Mother's Day Masses was due to the leaked draft of the Supreme Court suggesting an overturn of the 1973 Roe vs. Wade, which permitted abortion. The group, in fact, Tweeted on May 7, it planned to burn the Eucharist. (See: https://twitter.com/RuthSentUs/status/1522942814895546370)

Protesters at the Cathedral of Our Lady of the Angels in Los Angeles. pic.twitter.com/yj0kWUfQYs

Unbelievable!! Now people are being bothered in Church.
At the Cathedral of Our Lady of the Angels in Los Angeles, left-wing protesters tried shutting down Sunday mass to protest in support of abortion. They are forced out by security & parishioners. pic.twitter.com/Ij1ltqcyh2