Morning Star News reports that a Christian student stoned to death at a college in northwest Nigeria on Thursday (May 12) was falsely accused of blaspheming the prophet of Islam, after thanking Christ for passing an exam, also because she had refused to date a Muslim, sources said.

Deborah Emmanuel Yakubu, a 200-level student at Shehu Shagari College of Education in Sokoto, the capital of Sokoto state, was beaten, stoned to death and her body set on fire, area residents said; a video showing the attack reportedly appeared on social media on Thursday (May 12). In the video, an unidentified man reportedly rages in the Hausa language that he killed Yakubu and set her body on fire.
SEE ALSO: #BreakingNews Catholic Cathedral and Centre Attacked after Arrest of Murderer of Deborah, the Christian Falsely Accused of Blasphemy https://www.catholicnewsworld.com/2022/05/breakingnews-catholic-cathedral-and.html

Yakubu, a member of the Evangelical Church Winning All (ECWA) in her native Tungan Magajiya town, Rijau County in Niger state, was falsely accused of blaspheming Muhammad by a Muslim whose advances she had refused.

Pastor Azzaman told Morning Star News. “She didn’t insult prophet Muhammad, but it was discovered that she turned down a Muslim proposal to date her. That led to him accusing her of insulting prophet Muhammad.”

Local media reported that Yakubu said in the WhatsApp chat group that she had passed exams thanks to Christ, and when she was pressured to retract the statement and apologize, she declined. 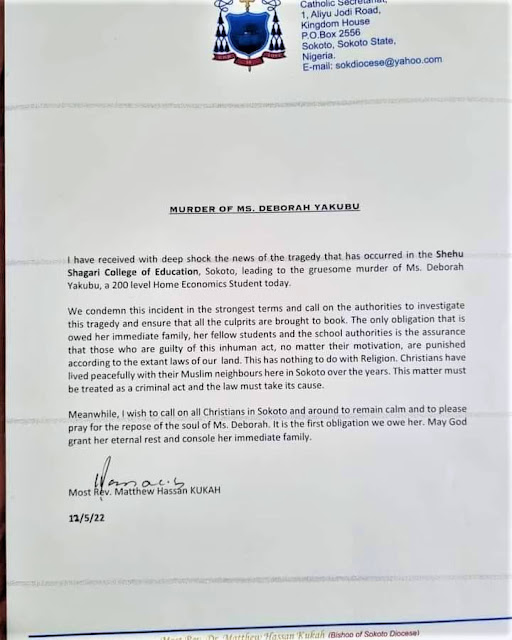 Area residents told Morning Star News in text messages that a Muslim mob dragged Yakubu from her hostel in the morning, stoned her to death and burned her corpse.

“This morning, a Christian female student was stoned to death and burned by some Muslim students who accused her of insulting Muhammad,” said area resident James Shingumi, as did another person living in the area.

The Rev. Kelvin Ugwu, a Roman Catholic priest, said in a statement that he had viewed a video of the assault.

“I can’t bring myself to share the videos of how they stoned and beat this young lady to death and subsequently burned her body,” Ugwu said. “It is very, very traumatizing.”

Two students have been arrested in connection with the killing, according to the Sokoto State Police Command. Police spokesperson Ssnusi Abubakar said all those connected to the crime would be arrested.

Sokoto state’s information commissioner confirmed the killing, saying that as a proactive measure against escalation, officials had ordered the closure of the institution. Gov. Aminu Waziri Tambuwal directed the ministry of higher education and relevant security agencies to investigate, said Isah Bajini Galadanci, commissioner of information, in a statement on Thursday (May 12).

“Meanwhile, Gov. Aminu Waziti Tambuwal has called on the people of the state to remain calm and maintain peace as the government would take appropriate actions on the findings of the investigations by the relevant authority,” he said.

The Catholic Bishop of Sokoto Diocese, the Rev. Matthew Hassan Kukah, called on Christians to remain calm and for authorities to arrest and prosecute the killers.

“The only obligation that is owed her immediate family, her fellow students and the school authorities is the assurance that those who are guilty of this inhuman act, no matter their motivation, are punished according to the extant laws of our land,” Kukah said in a press statement. “This has nothing to do with religion. Christians have lived peacefully with their Muslim neighbors here in Sokoto over the years. This matter must be treated as a criminal act, and the law must take its cause.”

The leader of Muslims in Nigeria, the Sultan of Sokoto, issued a statement condemning the killing. 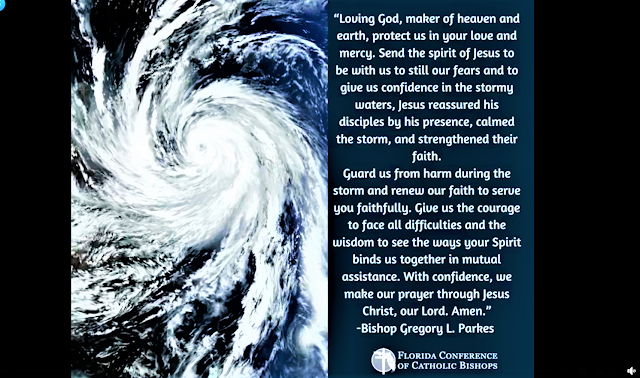