Saint May 23 : St.John Baptiste de Rossi a Missionary and Catechist who Spent Many Hours Daily Hearing the Confessions and Died in 1764 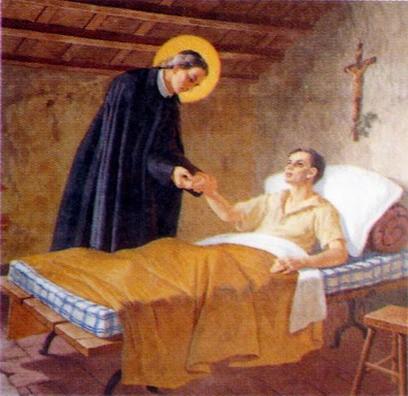 MISSIONARY AND CATECHIST
Feast: May 23
Feast Day:May 23Born:February 22, 1698, Voltaggio, Province of Alessandria, Piedmont, Duchy of SavoyMay 23, 1764, Rome, Papal StatesCanonized:December 8, 1881, Rome by Pope Leo XIIIMajor Shrine:Church of San Giovanni Battista de Rossi, Rome
Born at Voltaggio in the Diocese of Genoa, 22 February, 1698; died at Rome, 23 May, 1764; feast on 23 May. His parents, Charles de Rossi and Frances Anfossi, were not rich in earthly goods, but had solid piety and the esteem of their fellow-citizens. Of their four children, John excelled in gentleness and piety. At the age of ten he was taken to Genoa by friends for his education. There he received news of the death of his father. After three years he was called to Rome by a relative, Lorenzo de Rossi, who was canon at St. Mary in Cosmedin. He pursued his studies at the Collegium Romanum under the direction of the Jesuits, and soon became a model by his talents, application to study, and virtue. As a member of the Sodality of the Blessed Virgin and of the Ristretto of the Twelve Apostles established at the college, he led the members in the meetings and pious exercises, in visits to the sick in the hospitals and in other works of mercy, and merited even then the name of apostle. At the age of sixteen he entered the clerical state. Owing to indiscreet practices of mortification he contracted spells of epilepsy, notwithstanding which he made his course of scholastic philosophy and theology, in the college of the Dominicans, and, with dispensation, was ordained priest on 8 March, 1721. Having reached the desired goal, he bound himself by vow to accept no ecclesiastical benefice unless commanded by obedience. He fulfilled the duties of the sacred ministry by devoting himself to the labourers, herds, and teamsters of the Campagna, preaching to them early in the morning, or late in the evening, at the old Forum Romanum (Campo Vaccino), and by visiting, instructing, and assisting the poor at the hospital of St. Galla. In 1731 he established near St. Galla another hospital as a home of refuge for the unfortunates who wander the city by  night ("Rom. Brev.", tr. Bute, Summer, 573). In 1735 he became titular canon at St. Mary in Cosmedin, and, on the death of Lorenzo two years later, obedience forced him to accept the canonry. The house belonging to it, however, he would not use, but employed the rent for good purposes.For a number of years John was afraid, on account of his sickness, to enter the confessional, and it was his custom to send to other priests the sinners whom he had brought to repentance by his instructions and sermons. In 1738 a dangerous sickness befell him, and to regain his health he went to Cività Castellana, a day's journey from Rome. The bishop of the place induced him to hear confessions, and after reviewing his moral theology he received the unusual faculty of hearing confessions in any of the churches of Rome. He showed extraordinary zeal in the exercise of this privilege, and spent many hours every day in hearing the confessions of the illiterate and the poor whom he sought in the hospitals and in their homes. He preached to such five and six times a day in churches, chapels, convents, hospitals, barracks, and prison cells, so that he became the apostle of the abandoned, a second Philip Neri, a hunter of souls. In 1763, worn out by such labours and continued ill-health, his strength began to ebb away, and after several attacks of paralysis he died at his quarters in Trinità de' Pellegrini. He was buried in that church under a marble slab at the altar of the Blessed Virgin. God honoured his servant by miracles, and only seventeen years after his death the process of beatification was begun, but the troubled state of Europe during the succeeding years prevented progress in the cause until it was resumed by Pius IX, who on 13 May, 1860, solemnly pronounced his beatification. As new signs still distinguished him, Leo XIII, on 8 December, 1881, enrolled him among the saints.(Taken From Catholic Encyclopedia)