Ukraine Archbishop says "...for the 80th day in a row...the Russian army, which is destroying, killing our people and trampling Ukrainian land." 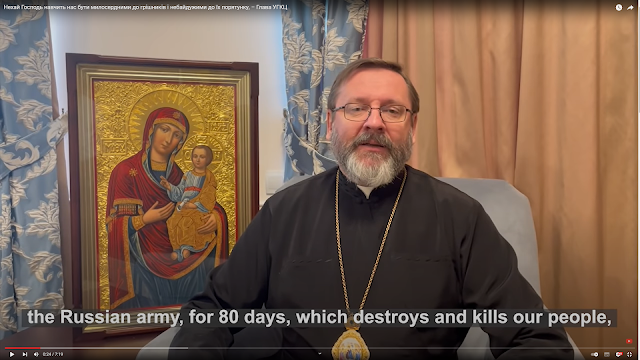 Dear brothers and sisters in Christ!
Today is Saturday, May 14, 2022, and for the 80th day in a row, the Ukrainian people are repelling a full-scale offensive by an unjust aggressor, the Russian army, which is destroying, killing our people and trampling Ukrainian land.
But today we have good news - Ukraine was in Kharkiv. We managed not only to defend this historically large city of millions, but, as was the case with Kyiv, Chernihiv and Sumy, to show that Slobozhanshchyna, a region located on the border with the Russian Federation, is a truly historic Ukraine. Today we thank all the defenders of Kharkiv and those who gave their lives for the freedom of this ancient Ukrainian city.
However, the enemy does not lay down arms. He is actively and massively attacking, trying to completely capture the territories of Luhansk, Donetsk and Kherson regions, he wants to gain a foothold in Zaporozhye. That night, massive missile and artillery strikes damaged part of the infrastructure in the Dnipropetrovsk region. Mykolayiv was fired upon.
But Ukraine stands. Ukraine is struggling. And we feel that the Lord God blesses our struggle, which is just. He is giving Ukraine victory step by step - victory over evil, over an unjust invader.
Today we begin to reflect on another kind of work of charity - the soul of our neighbor. We know that the human soul, in particular its powers, which are the mind, will and feelings, are similar to the rudder on which man is guided. Therefore, our destiny depends on our state of mind and spiritual health, not only in the earthly part of our life journey, but also eternal life, the possibility or impossibility of participating in the eternal happiness that God gives us.
The first and perhaps one of the most important acts of charity for the soul of a neighbor is to convert a sinner. We know that when the Lord God looks at a sinful person, he first of all notices the sin he is committing, but sees his child who has fallen into the clutches of the bondage of sin. This attitude of man towards the sinner is God's mercy. The Lord God says, "I do not want the sinner to die, but I want him to be converted and live."
The conversion of the sinner, his deliverance from the snares of evil, the ability of man to be free from evil - a sign of true freedom. Jesus Christ says, "I came not to condemn the world, but to save the world." Therefore, every Christian, as a participant in the priestly, royal, and prophetic mission of Jesus Christ, has a duty, a calling, to cooperate with our Savior in the salvation of man.
We sometimes get the impression that to convert a sinner means to interfere in his internal affairs, in his private space. Sometimes a person in the conditions of extreme individualism of modern culture believes that no one else should interfere in what is happening in his heart.
But at the same time, we are convinced that sometimes a person is in dire need of someone sent by the Lord God to save him from the bondage of sin. And when we see people around us who are mired in the clutches of sin, let us not be indifferent to them and do not rush to condemn them. Instead, look at the sinner through God's eyes and try to help convert him. It is said that the conversion of man is one of the greatest miracles that God performs. It is a gift, a grace of the action of the Holy Spirit. However, the work of charity to help convert a sinner is the calling of every Christian. If we all heard about the state of the soul, not only our own but also our neighbor's, then, perhaps, there would be less evil in the world.
May the Lord God help us all find the way to conversion. May the Lord God help us to take care of the conversion of our neighbors. May he teach us to be merciful to sinners and not indifferent to their salvation.
Today we ask: “God, save Ukraine! God, convert those who are killing us today! God, turn away from sin all those who devise wicked plans and are the cause of the calamity of war in the modern world! God bless the Ukrainian army, which stops the sinful attacker! God bless the children of Ukraine, turn us all away from sin and give us true freedom, which is the freedom to do good! ”
The blessing of the Lord be upon you, with His grace and love for man, always, now, and always, and forever and ever. Amen.
Christ is Risen! He is Risen Indeed!